All Aboard for Saratoga

The preliminary survey for the proposed railroad from Amsterdam to Saratoga Springs is progressing rapidly, the engineers having gone through Rockton and Hagaman and yesterday were working toward Galway. A. B. Paine, the engineer in charge, announces that it has not yet been determined from which point Amsterdam will be entered, the surveyors having begun their work on Forest avenue, near the Kelloggs & Miller branch.

(Note: Rockton was at one point, the name for the city of Little Falls.Go to the Rockton Exhibit on the Little Falls Historical Society website for more information. )

The Albany Journal recently made the following complimentary reference to a musician who is well known in this city: “Signor Joseph Gioscia, whose fame as a solo violinist and orchestral leader extends far beyond the state, has blossomed into a composer of rare merit. A generation ago Mr. James M. Sayles of this city gave to the world his famous “Star of the Evening,” which for years was sung all over the world, and now Signor Gioscia’s new two-step, “Policy Sam,” is likely to have the same popularity. Lite its composer, the two-step is full of musical fire-ginger and catch melody.”

At the Kasson To-Night.

Denman Thompson and Geo. W. Ryer’s latest success, “The Sunshine of Paradise Alley,” which is now in its fourth big year, and which comes to the Kasson for the first time ton-night and the Grand to-morrow night, is without doubt one of the most successful plays produced during the past three seasons, and as a pecuniary success it has few equals. It fairly conquered the success which attended its New York run, which extended into the heated term, when many habitues of the theatre were out of town, and play-going for those who remained entailed positive discomfort. “Sunshine” is a sort of contrast picture to “The Old Homestead,” the popular fancy caught by its simple story, its scenes of every day homely life, its quaint characters, its abundance of wholesome fun and its picturesque state settings. The company contains such well known players as Mrs. Charles Peters, Phila May, May Thompson, Pearl Hamlin, John Walsh, W. J. Sully, Donald Harold, Albert Brown, T. W. Carroll, and the Verdi Ladies’ Quartette.

The Heart of Chicago

The Heart of Chicago, Lincoln J. Carter’s spectacular comedy drama, will be produced at the Kasson Thursday, Jan. 25, and the Grand, Friday, Jan. 26. It is said to contain a story of extraordinary power, well told and relieved by many bright moments of clever comedy. the interpreting company includes some very clever people, who ought to do full justice to the thrilling story. All the scenes and incidents are located in the great western metropolis, the the story runs through the space of time between the great fire and the World’s Fair. We are promised an abundance of handsome scenery, wonderful mechanical effects and mysterious electrical devices. Chief among these many scenic features are the vivid reproduction of a section of the great fire and the wonderful advance locomotive, which is seen to approach rapidly from apparently miles away an bring up at the footlights full-sized and perfect. This effect is covered by twenty-five patents. 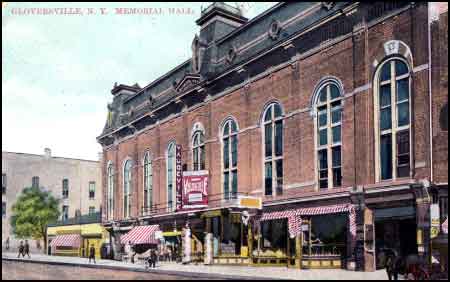 Note: On the Kasson Theatre, the City of Gloversville’s website notes,

The Kasson Opera house in Memorial Hall on Main Street hosted many prominent entertainers, such as Sarah Bernhardt, the first lady of the stage, Evelyn Nesbit, the Girl in the Red Velvet swing who was married to Harry Thaw whose claim to fame was that he murdered the famed architect Stanford White whom he believed soiled his lovely wife Evelyn.