The 40-mile connection between Herkimer and Oriskany by Jim Rogers

Living in the Mohawk Valley we are surrounded by historic locations that have both local and national significance. With a break in the recent summer heat, we were able to get out to visit a few of these local historic sites. 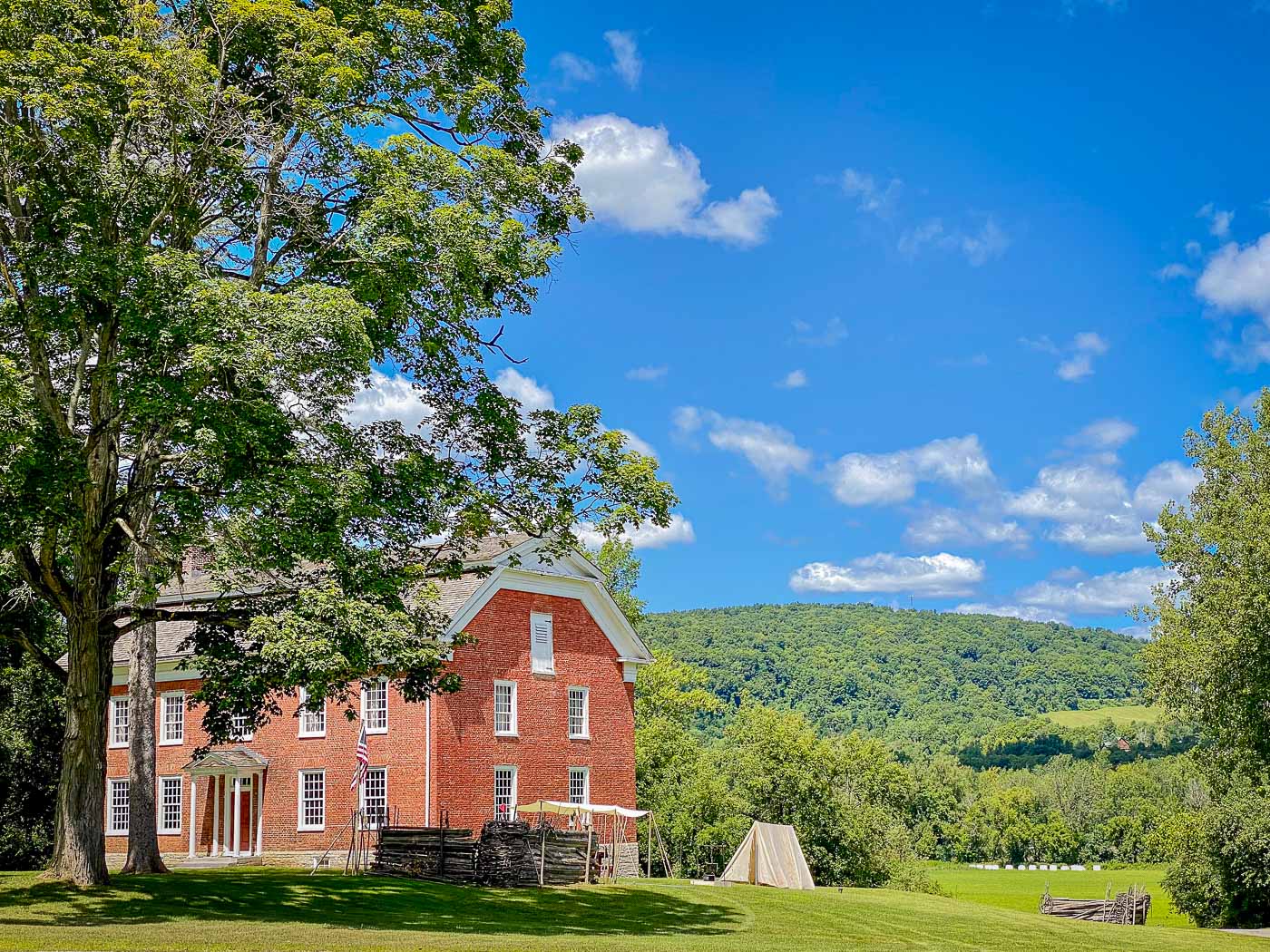 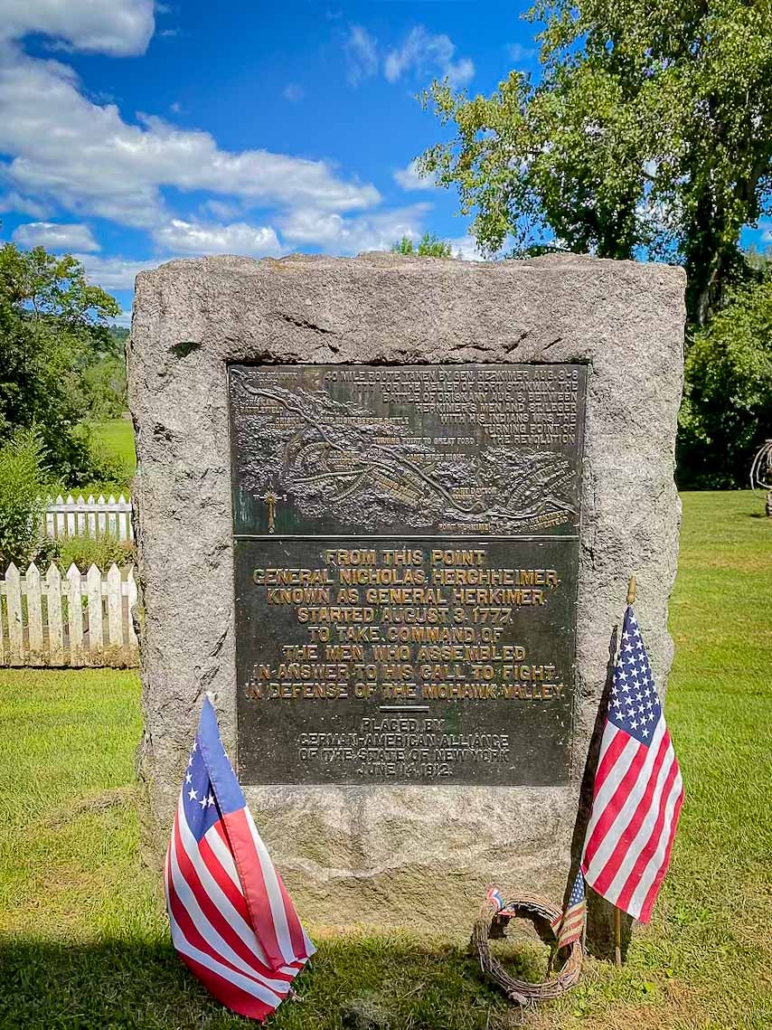 A recent visit to the General Herkimer Home State Historic that piqued our interest in events surrounding his life.

It was on the third of August in 1777, that General Nicholas Herkimer departed from his home in present day Little Falls to lead forces of the Tryon County Militia to Fort Stanwix in what is now  Rome, NY. Their mission was to support the forces at Fort Stanwix and help lift the siege by British and loyalist forces led by Brigadier General Barry St. Leger.

It was a 40-mile march along the Military Road. Herkimer’s forces included 800 militia men, primarily farmers of Palatine German descent accompanied by a small force of Oneidas along with other personnel and supporting wagons of arms, ammunition, food, and other supplies needed to help lift the siege at Fort Stanwix. It has been said that their narrow column extended about a mile long as they made their way along the narrow military road.

August 6, marked the 245th Anniversary of the Battle of Oriskany

This year on August 6, marked the 245th Anniversary of the Battle of Oriskany, often considered the bloodiest battle of the American Revolution.

Visiting the Oriskany Battlefield State Historic Site we were able to see first hand the thickly wooded forest and small ravine where the battle took place. The site is well marked making it easy to follow and walk the narrow, winding path that, on August 6, 1777, General Herkimer’s forces took into the ravine and where the attack on the column began as they began to emerge up the other side. Moving slowly on a narrow, winding path they were surrounded on three sides. Herkimer’s forces were at a considerable disadvantage and sustained heavy losses as the initial shots rang out. Much of the battle was hand-to-hand; this was neighbor against neighbor, hand-to-hand combat, in one of the bloodiest battles of the Revolutionary War. Colonel Louis Cook who was in the middle of this hand-to-hand combat is described as:

Among the Oneidas who rendered efficient aid to the American cause was one Louis who was of St. Regis Indian birth. He was given a colonel’s commission, and was ever afterward called Colonel Louis. The Rev. Dr. George A. Lintner, late of Schoharie, introduced this anecdote in a lecture before a Fort Plain audience some years ago, no doubt thinking the hero was a white man. Here is the dominie’s story as he gave it:
“A private soldier named Louis, a rough and daring old hunter who, after the Indian fashion, carried his knife and tomahawk with him, became so much excited in the heat of the battle, that one of his comrades occupying a tree next to him, asked him, ‘Louis, what is the matter?’ ‘Matter enough,’ said Louis, ‘there is one of the black serpents lying in the fork of a fallen tree and every time he rises up he kills one of our men. I can stand it no longer; either he or I must die.’ As he said this he raised his rifle and fired. The Indian leaped into the air and fell dead across the fork of a tree which had sheltered him. Louis gave a wild Indian whoop and then ran up to his victim.-tore off his scalp and, returning to his comrades, threw it down before them, saying: ‘That fellow will do no more harm.’ Mr. Lintner assured the writer he had this story well authenticated.” – Darren Bonaparte, Wampum Chronicles, (Originally published in The People’s Voice, September 30, 2005) 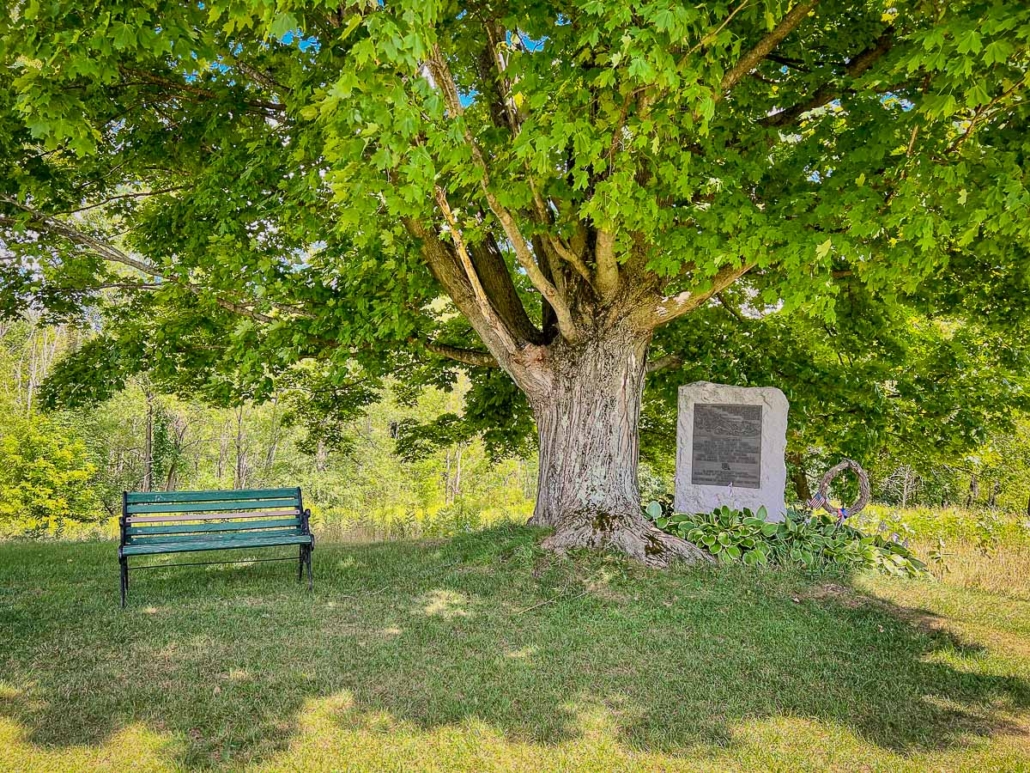 Marker near the location where General Herkimer directed the militia while wounded.

Further up the hill on the western side of the ravine, a marker is placed identifying the likely location where, after being severely injured in the leg when his horse was shot out from under him, Herkimer continued to rally and lead his forces against the onslaught. A force of 250 men from Fort Stanwix raided the nearly deserted enemy camps thus greatly reducing loyalist numbers and preventing the British from entering the Mohawk Valley. Once the battle subsided, General Herkimer was brought back to his home in the Mohawk Valley.

On Saturday, we attended the annual Memorial Service held at the cemetery where Nicholas Herkimer is buried at the Herkimer Home State Historic Site. A descendent of the first Palatine Germans who arrived in the Mohawk Valley in the early 1700’s, he died from wounds received at the Battle of Oriskany on August 16, 1777.

As the Mohawk Valley and the nation move toward the 250th Anniversary of the signing of the Declaration of Independence, it is worth remembering what it took to get there. Tryon County Militia, Oneidas, and their families sacrificed so much at Oriskany and led to the birth of a nation. 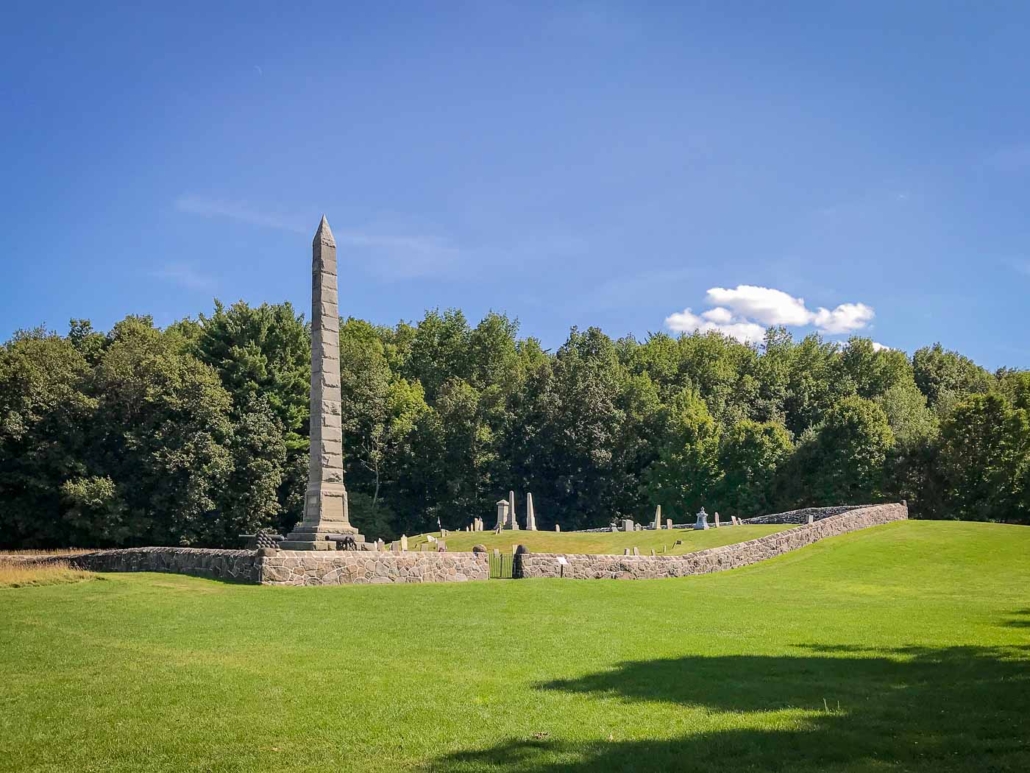