I was asked recently my a friend- “Who are your heroes?”

I answered based on my understanding that a hero is a person(s) whose effort or achievement goes way beyond the expected to the point of deserving to be memorialized for decades or even longer. “Marine SSgt. Joseph “Stash” Zawtocki, Jr.” He endured 684 days of captivity at the hands of the Vietcong, tried to escape, was recaptured and subjected to starvation and torture until he died on Christmas Eve, 1969. “And Airman Eddie Juteau, Jr.”  Though suffering from Agent Orange-dioxin caused non-Hodgkins lymphoma, the Herkimer resident fought until his final breath to convince the VA and Federal government to improve treatment for his brother “Nam vets suffering from exposure to the deadly herbicide. When I asked my pal who his were, he responded, ”General Nicholas Herkimer;” Herkimer-a name synonymous with a county, village, town, college, etc., etc. in central New York. Herkimer-a name I’ve seen or heard every day of my life for the past 60 years.

Born in 1728, the son of German immigrants, Herkimer became a prosperous, slave-owning farmer in the Mohawk Valley and as a Captain in the militia, gained some fame helping to repel an attack on German Flats during the French and Indian War. At the outbreak of the Revolutionary War, he headed the Tryon County Militia as a Brigadier General (appointed by the Provisional Congress). 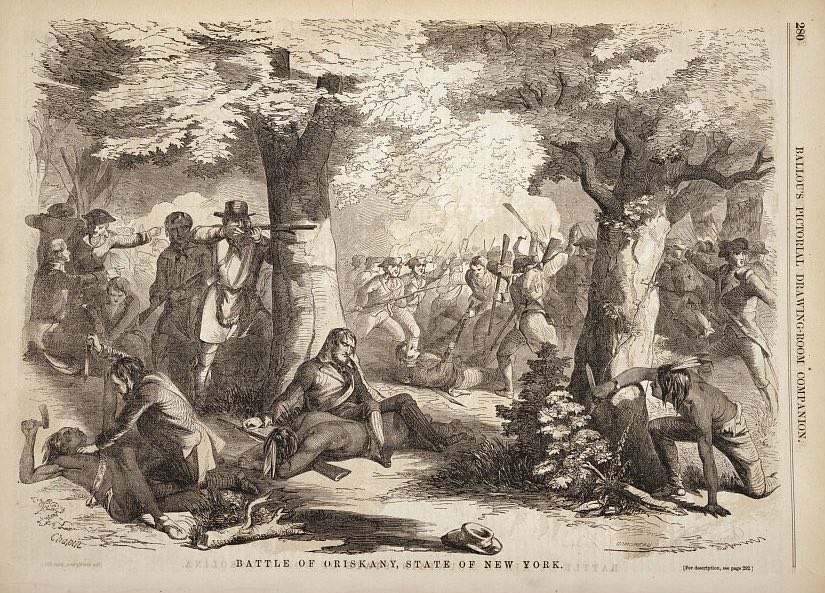 1857 print shows scene during the battle at Oriskany, N.Y., with American patriots combating the combined forces of the British, Loyalists, and Natives. General Nicholas Herkimer, commander of the American forces, is shown (on the left) giving orders from his saddle which is on the ground after his horse was shot from beneath him.

In a version of the event still probably being taught in area schools, General Herkimer was hailed as the hero of the Battle of Oriskany on August 6, 1777. My friend regaled me about how he led some 800 militiamen in defeating c. 400 Mohawks, Senecas and British Rangers near Oriskany Creek, and ended the siege of Fort Stanwix by  Lt. Col. Barry St. Leger thereby preventing  the British from accomplishing a three-pronged attack plan which would have taken New York, divided the colonies in two and probably resulted in an American defeat in the war. He also lauded the bravery of General Herkimer who, during the fight, suffered a leg wound so severe that it would cost him his life 10 days later.

“Not the way it happened,” I replied.

I then regaled him with what I learned about the battle in the great Dr. Bill Chazanof’s American History I class at Fredonia State.  From a strictly factual, well-researched basis, the battle’s outcome was determined by a succession of what can only be described as quirks of fate.

Quirk #1 – Herkimer’s orders were to wait before advancing on Stanwix until he heard 3 cannon shots from the fort. But as Barbara Graymont tells us in her seminal work, “ The Iroquois in the American Revolution,”  the General was taunted for his caution by his officers and “stung by these jibes” pushed forward without taking proper precautions. To hell with the cannon, I ain’t no coward.

Quirk #2 – Herkimer had a number of Oneidas with him. (Note-Oneidas were one of the five nations comprising the Iroquois Confederacy. Their siding with the Americans ignited a civil war within said Confederacy which would, as Graymont later points out, have serious consequences). But he failed to send them out as advance scouts. Had he done so, the  surprise attack would never have occurred and c.500 lives saved. As an indication of how one-sided the slaughter was, the Rangers-Indians only lost c.60 men.

Quirk #3 – Following the battle, a Seneca chief, Sayenqueraghta, and Mohawk leader Joseph Brant suggested to St. Leger that with a couple hundred of their warriors they could take out what was left of the Tryon County Militia and clear a path all the way to Albany where the 3-prongs (St. Leger, Burgoyne and Howe) were to meet. Ever the conservative, Lt. Col. Barry felt he couldn’t spare the men. Huge opportunity lost as related to the 3-pronged attack, but a decision which made the next and most significant quirk possible.

Quirk #4 – The fortunes of the colonists were about to change for the better because of a ruse perpetrated by none other than Benedict Arnold*. The General made a deal with a feeble-minded Tory he had captured named Hans Schuyler. In exchange for going from Albany to Ft. Stanwix and telling St. Leger that a large colonial army was coming up the valley to relieve the fort’s heroic commander, Colonel Peter Gansevoort, he’d be released. Schuyler made it through and told the Brits that the Americans’ numbers were “as numerous as leaves on the trees.” At the same time, reports were surfacing confirming Hans’ contention. That was the final straw for the Senecas (most numerous of the Brit’s Indian allies) who had already  lost 5 chiefs at Oriskany and had come to believe that they’d been sold a bill of goods when  told originally that the campaign would be a piece of cake. With his Native support gone and Arnold on the way, St. Leger realized that he didn’t have the strength to continue. He abandoned the siege on August 22nd and headed back to Ft. Oswego, dooming in his wake the 3-pronged attack plan.

I told my bud not to feel bad-that most people don’t-that what he had been taught wasn’t history but “his story”-that avoiding rather than embracing the truth regarding our nation’s past just to make it look good serves no useful purpose and prevents us from learning from our mistakes. I suggested  that  he  get Graymont’s book if he wanted a more detailed account of the Battle and to check out her Notes and Bibliographical Essay if he had any concerns about the veracity of my “version.” I also told him not to go too hard on General Herkimer. His bravery was unquestionable, he died for his country and while he failed to achieve his objective of relieving the siege, he and his courageous troops gave rise to  unforeseen circumstances, quirks of fate, which, when all was said and done, contributed to America’s victory.  In those ways, Oriskany was, as Graymont wrote, “the turning point” in this nation’s most significant war.

“Who’s your other hero?” I asked. ‘Heroes,” he replied. “The passengers on United Airlines Flight 93 who took down the plane headed for D.C. on 9/11.” “No argument there,” I answered.

*Take a few minutes and check out Arnold’s impact later that year on another significant event-the Battle of Saratoga. Many texts only portray Arnold as “the traitor”- conveniently omitting his roles at Oriskany and Saratoga.

Ray Lenarcic is a member of the Little Falls Historical Society.

The Yager Museum of Art & Culture

Reflections on the 245th Anniversary of the Battle of Oriskany and Beyond by...
Scroll to top