The May 14, 2022 Patriots Day program at Norway Rural Cemetery co-sponsored by the Norway and Little Falls Historical Societies was a most successful event attended by some fifty people. The purpose of the annual Patriots Day observance is to recognize the sacrifices and contributions made by our Mohawk Valley ancestors during the American Revolution.

This present piece of writing expands upon one of the speaking topics from that Patriots Day program, the historical connections between the Battles of Oriskany and Saratoga, the ensuing American-French military alliance, and the Revolutionary War-ending Battle of Yorktown.

The publication of this piece is also intended to coincide with the 245th anniversary of the August 6, 1777 Battle of Oriskany. 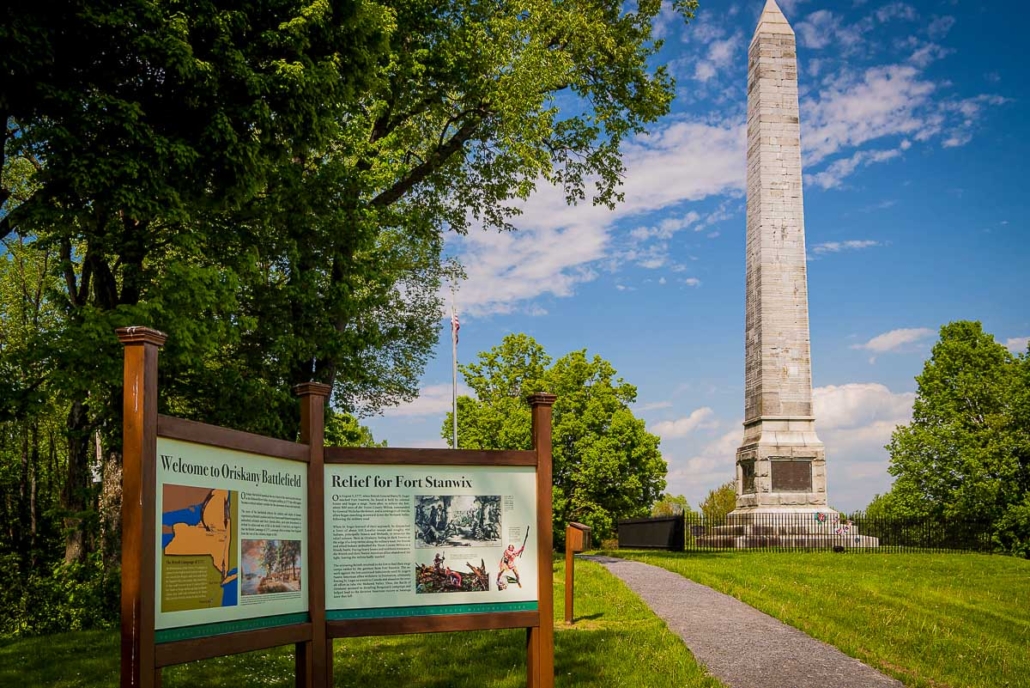 Two years into the Revolutionary War, the British three-prong campaign of 1777 sought to seize New York’s waterways and thus divide New England from the rest of the colonies.

British forces in Montreal and New York were central to this plan. One prong of that offensive had Major Barry St. Leger leading a large force of British regulars, loyalists, and Mohawk and Seneca Indians eastward through the Mohawk Valley toward a never-realized rendezvous at Albany with other British forces commanded by General John Burgoyne.

St. Leger’s forces laid siege to Fort Stanwix (Schuyler) in early summer 1777. In early August, General Nicholas Herkimer and his Tryon County Milita marched westward from Little Falls to the relief of Fort Stanwix. Instead, they stumbled into a bloody ambush at Oriskany on August 6; the Patriots sustained a horrific rate of casualties at Oriskany with some 451 dead or wounded. General Herkimer died a few days later from his battle wounds.

Following this battle, disillusioned Mohawk and Seneca Indians abandoned St. Leger, leaving his expedition without scouts or guides. St. Leger was forced to give up his campaign and return to Canada. Oriskany was a stalemate of sort and its outcome helped to seal Burgoyne’s eventual fate at Saratoga. The British three-prong offensive began to wobble at Oriskany.

St. Leger’s abandonment of his campaign following the Battle of Oriskany removed the immediate threat to the safety of our ancestors, but a civil war pitting Patriots against Loyalists raged on for three more years. Tory raids led by Walter Butler and Joseph Brandt terrorized Mohawk Valley residents. The Andrustown Massacre on July 11, 1778, the German Flatts raid on September 17, 1778, and the Cherry Valley massacre on November 11, 1778 all exacted a deadly toll. The Little Falls gristmill attack occurred in June 1782. Our ancestors bore the brunt of Revolutionary War death and devastation longer than any other part of America, with the possible exception of New York City.

NOTE:  The Little Falls Historical Society has installed an impressive NYS historic marker nearby the site of the gristmill attack at the end of West Mill Street.

A second leg of the three-prong offensive had Burgoyne’s forces leaving Canada via the Lake Champlain route towards Albany. They were to crush all Patriot resistance as they moved southward and seize Fort Ticonderoga which the colonists gave up without a fight.

Fresh from victories at Fort Ticonderoga on July 6 and at Hubbardston on July 7, a still confident Burgoyne sent part of his forces to Vermont in search of supplies. Instead, they suffered a defeat near Bennington, Vermont on August 16 at the hands of New Hampshire militiamen under Brigadier General John Stark.

Oriskany and Bennington changed the momentum of the three-prong offensive. Complete defeat and British surrender followed as the Saratoga campaign played out from September 19 through October 17, 1777.

The third leg of the three-prong offensive called for British forces under General William Howe and/or General Henry Clinton to move northward up the Hudson Valley to meet up with Burgoyne at Albany. Neither Howe nor St. Leger ever came to Burgoyne’s relief.

The momentous two-day Battle of Saratoga left Burgoyne’s army defeated and desperate. With no relief in sight, Burgoyne decided to retreat and led his army north to a final encampment site that would become known as Victory Woods. Capituation followed a few weeks later at Surrender Point on October 17.

The Battle of Oriskany thus impacted the outcome at Saratoga in two ways, British forces were smaller and Patriot forces were larger. Mohawk Valley militiamen no longer had to defend their homes from a would-be St. Leger invasion and instead could aid the cause at Saratoga.

And that leads us to Benjamin Franklin and his successful efforts to get France to side with America in the wake of Saratoga. France was out for revenge since its French and Indian War defeat forced them to cede all North American lands to the British in 1763. The French had an axe to grind and Oriskany helped to sharpen that axe.

The critical question is whether or not American forces would have prevailed at Saratoga if St. Leger had not been turned back at Oriskany on that sweltering August day in 1777 and if either Howe or Clinton had sent British troops up the Hudson Valley and hooked up with Burgoyne’s forces at either Albany or Saratoga.

It is impossible to know the answers to these questions. What we do know is that some number of our ancestors fought at both Oriskany and Saratoga. And we also know that following the British surrender at Saratoga, Benjamin Franklin and his delegation of American diplomats in Paris were able to convince the French to aid the American cause for the remainder of the Revolutionary War.

Further still, a significant number of the 40,000 forces that entrapped British General George Cornwallis and his British troops on Yorktown peninsula in Virginia in 1781 were French. The French navy also had Cornwallis cut off by sea. British surrender and the cessation of Revolutionary War hostilities soon followed. French participation in the Revolutionary War was crucial to American independence. Our ancestors contributed to that outcome.

Thomas Paine’s iconic essay THE AMERICAN CRISIS refers to “sunshine patriots” as those who shrank away from duty in the darkest early days of the American Revolution. Our ancestors’ heroics at the horrific August 6, 1777 Battle of Oriskany and later at Saratoga helped to bring the French into the Revolutionary War. These ancestors were not sunshine patriots.

The Saratoga Battlefield site, the Victory Woods historic site, the Surrender Point historic site, and the Battle of Saratoga monument are all within a few miles of one another in and around Schuylerville. What follows is a brief description of each site presented in the order in which they occurred historically. All these sites can be visited in a single day’s outing. 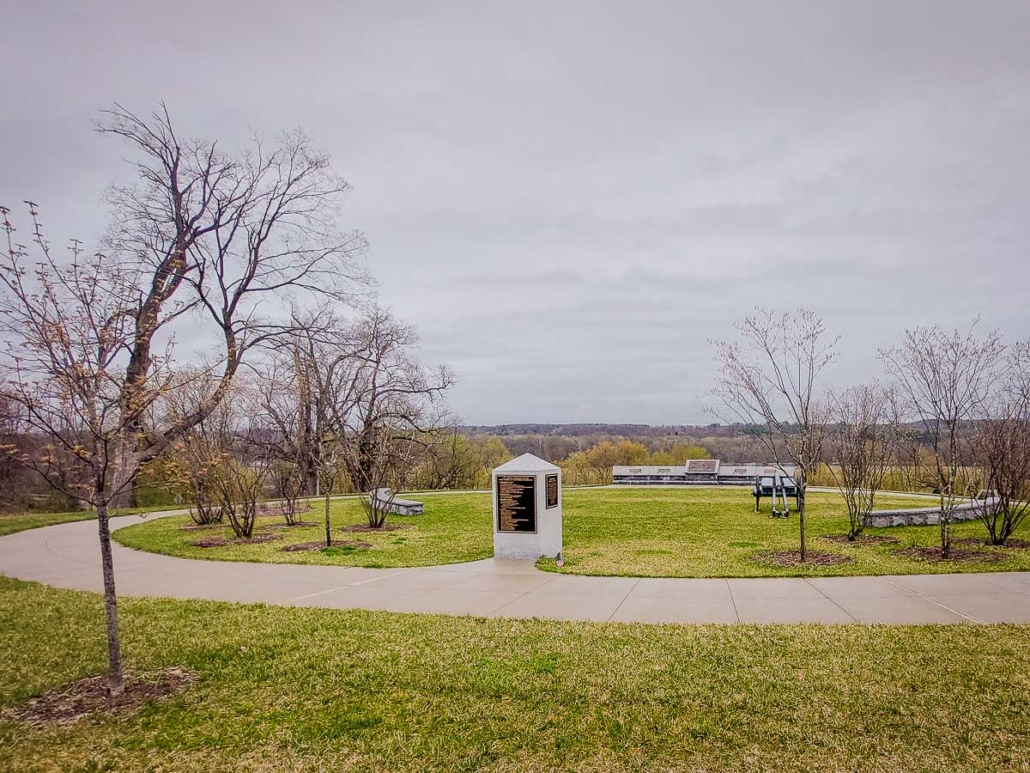 The SARATOGA BATTLEFIELD HISTORIC PARK is located south of Schuylerville off Route 4. The sprawling battlefield site has a great visitor center and interpretive signage along its meandering pathways and trails. 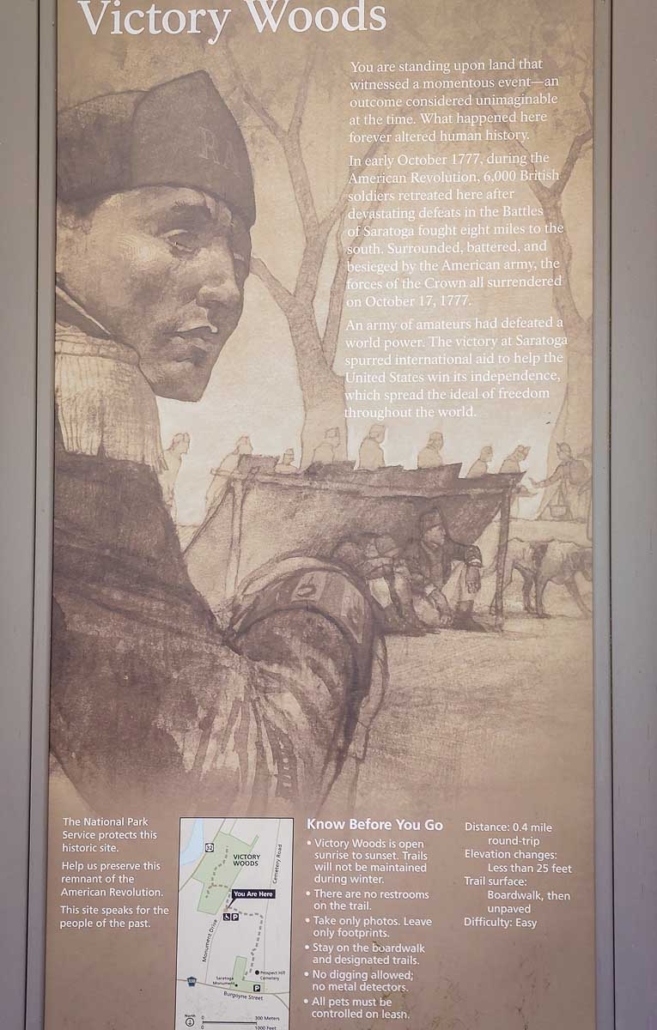 VICTORY WOODS is the area where Burgoyne’s starving and exhausted forces and entourage retreated to following the Battle of Saratoga. It is located near the base of Prospect Hill Cemetery and contains a one-half mile raised wooden walkway with interpretive signage. At the top of the cemetery sits the 155-foot stone obelisk BATTLE OF SARATOGA MONUMENT. The cemetery is located off Burgoyne Street in Schuylerville.

SURRENDER POINT is one of the most significant sites in the United States and is where Burgoyne surrendered his sword and army to American General Horatio Gates on October 17, 1777 after departing from Victory Woods. Surrender Point is also located off Route 4 south of Schuylerville and north of the battlefield site. 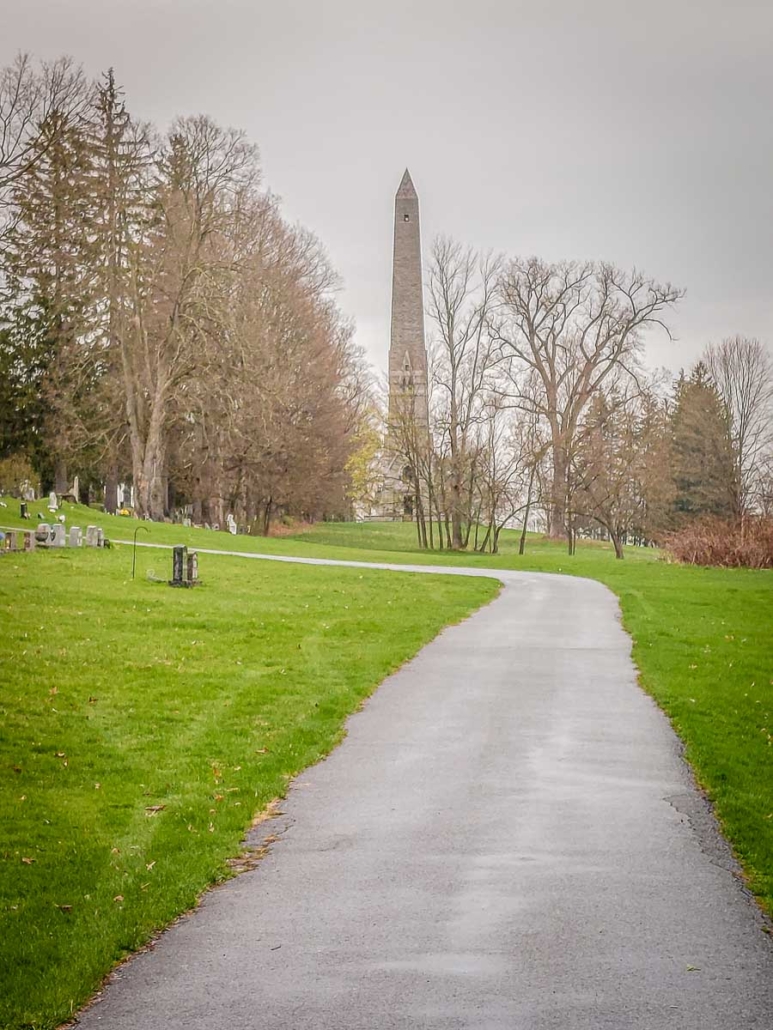 Additionally, the 306-foot tall BATTLE OF BENNINGTON MONUMENT is located in that community which is about an hour’s drive east from Schuylerville.

Following the Revolutionary War, George Washington wrote in a February 6, 1783 letter to Nathaneal Greene: “For it will not be believed that such a force as Great Britain has employed for eight years in this country would be baffled in their plan of subjugating it by numbers infinitely less, composed of men often times half-starved and always in rags, without pay and experiencing at times every species of distress which human nature is capable of undergoing.”

Jeffrey Gressler is a member of the Little Falls Historical Society.