Land Where The Partridge Drums

A History of the Akwesasne Mohawk Nation by Darren Bonaparte

Originally published in the Indian Time, November 12, 1993 (The Wampum Chronicles) 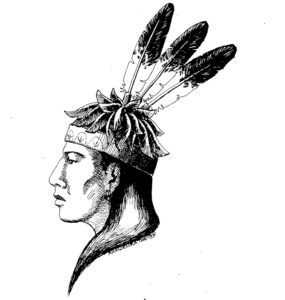 Akwesasne means “Land Where The Partridge Drums.” It is located on the St. Lawrence River where the Canadian provincial borders of Quebec and Ontario intersect with the American state of New York. It consists of a number of islands and portions of the southern mainland. Two rivers, the Raquette and St. Regis, join the St. Lawrence in the predominantly flat river valley. The city of Cornwall, Ontario, lies on the northern shore and is joined to the United States by a system of bridges that cross through Akwesasne’s only densely-populated island. The Adirondack Mountains, from which the St. Regis and Raquette Rivers descend, are visible on the southern horizon. These mountains and the area south of them were the homeland of the Kanienkehaka, or “People Of The Land Of Flint.” Our neighbors knew us by a different name: the Mohawks.

This work will provide a history of the Mohawks with an emphasis on the Akwesasne Mohawk Territory and the people who live there. It is important to note that the area described in the paragraph above is the undisputed territory of the Akwesasne Mohawks as it is today; our traditional territory is much greater. Kanienke, or “Land Of Flint,” once encompassed the entire Adirondack Mountains as far south as the Mohawk River Valley and included land in Vermont and Quebec as far north as the St. Lawrence River. Over time that territory came to include the Thousand Islands and tracts of land north of the St. Lawrence River. Today you could drive across the Mohawk territory remaining in New York in about the same time it would take you to drink a cup of coffee.

To really understand Akwesasne history, one must look far before the accepted 1755 founding date of the St. Regis Mission. One must even look before European contact to the era that is known to us only through the oral tradition, since this is the soil in which the seeds of the Mohawk saga were planted long ago. Land Where The Partridge Drums will place the events of Akwesasne history in their proper context with regard to Haudenosaunee history and, to a lesser extent, world history. Naturally, space does not permit more than a general description of the culture, personalities, and events of history that make up the Mohawk saga, but this book will provide a Mohawk point of view on the events depicted since most of the original sources were written by non-natives whose writings reflect the biases and prejudices of their time. Unfortunately, readers searching for the definitive collection of Mohawk oral history and tradition may be disappointed; Land Where The Partridge Drums deals mostly with information found in books, old newspapers, and archives full of dusty old documents stained by the coffee cups of time. The oral tradition clearly deserves a major project of its own.

Research for this project

The research for this project began in the years following the much publicized “Gambling War” and “Oka Crisis” of 1990. As the goal of this project is to bring things up to date as much as possible, these dark times must be touched upon. However, I have chosen not to go into detail about specific events because the Culture Vultures out there have already picked that skeleton clean in the form of endless newspaper articles, college theses, coffee table books, and television documentaries. I have also chosen not to use this history as a platform to push any particular “side” of these very divisive issues. If the research for this project has taught me anything, it’s that nothing is strictly black or white in Mohawk country.

I don’t expect that all people will agree with my take on the events described. History is deeply personal, especially to those who have seen it hijacked, twisted and hidden, and I won’t presume that this history is in any way definitive. I believe that the history and culture of the Mohawk Nation and Haudenosaunee Confederacy is worthy of a whole library of books. That is what is required if one is to do the subject justice, but a heavier responsiblity you would never find. To the people to whom this history and culture belongs, it is sacred ground, land that is best traveled in the footsteps of an elder who has been there. And that means following in person, not just reading a book about it.

When taken all at once, many of the events described in Land Where The Partridge Drums can be draining. But through all the warfare, internal division and hardship, we are constantly reminded of the remarkable resilience, patience, and community spirit that marked Mohawk people regardless of the time they lived or the adversity they faced. It is my hope that this history will serve as a reminder to the Mohawks living today that our grandfathers survived far worse political crises than we will ever know. We owe it to the future generations to learn from those that have come before us. The fact that we exist today in far greater numbers than ever before is a testament to their wisdom and tenacity.

By Darren Bonaparte, historian and author of  The Wampum Chronicles. Reprinted with permission.

Darren Bonaparte is a cultural historian from the Akwesasne First Nation. He is a frequent lecturer at schools, universities, museums, and historical sites in the United States and Canada. He has written four books, several articles, and the libretto for the McGill Chamber Orchestra’s Aboriginal Visions and Voices. Darren is a former chief of the Mohawk Council of Akwesasne. He is the creator of The Wampum Chronicles and historical advisor to film and television. He currently serves as the Director of the Tribal Historic Preservation Office of the Saint Regis Mohawk Tribe.

Next week, From the Land of Flint to the Land Where the Partridge Drums: The Migration from the Mohawk Valley to Kahnawake and Akwesasne (Introduction).

This day in Mohawk Valley history: January 23
Scroll to top