A good number of recently built US submarine chasers, moving down the canal, stopped in Little Falls on their way to New York City. They will bolster our shore defenses 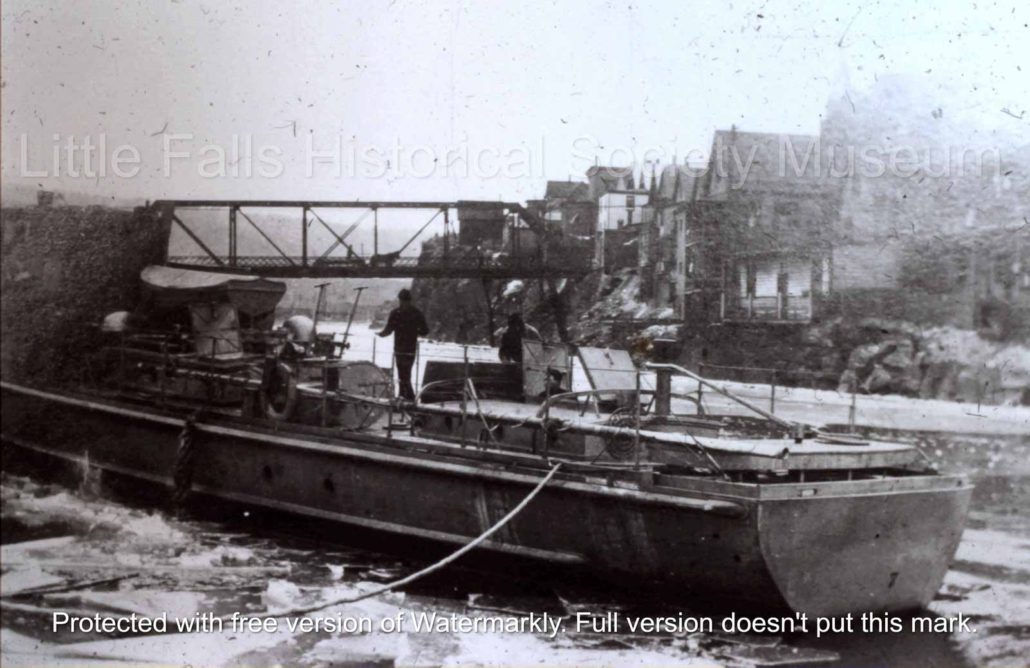 Submarine Chaser in the Barge Canal at Little Falls, NY

Franklin D. Roosevelt, who held the position of Assistant Secretary to the United States Navy in 1916, ordered the Navy to design a vessel that could destroy German submarines for World War I. A 110-foot wooden seaworthy vessel was designed, which was called a submarine chaser or sub chaser, which could hold a crew of around 30 enlistees.

The sub chasers were to be built in small civilian boatyards, for at the time, much larger warships were being built in the larger boatyards. France purchased 100 of these vessels. 121 vessels were deployed to defend the the Mediterranean Sea and Great Britain, with the remaining 221 submarine chasers being sent to protect the eastern coast of the United States. Throughout WWI, the Great War, the U.S. Navy lost six vessels.

Each sub chaser was to be labeled with the letters “SC” and was given a sequence number of the order in which it was built, with the SC standing for submarine chaser. They were equipped with artillery, such as 3-inch guns on the front deck, along with machine guns and anti-aircraft guns. The back of the vessel carried their primary weapon, which was the depth charge thrower. The depth charge would be loaded with TNT to attack the German submarines, which was designed to detonate underwater, rupturing the submarine’s hull. The smokestack on the vessel would carry a star for every submarine it destroyed. Underwater noises were detected with the use of hydrophones.

German submarines were called U-boats, which was short for undersea-boat. Of the 373 German U-boats used during WWI, 178 were sunk during combat by the Allies.

In December of 1917, a few sub chasers were dispatched from boatbuilders along the Great Lakes. 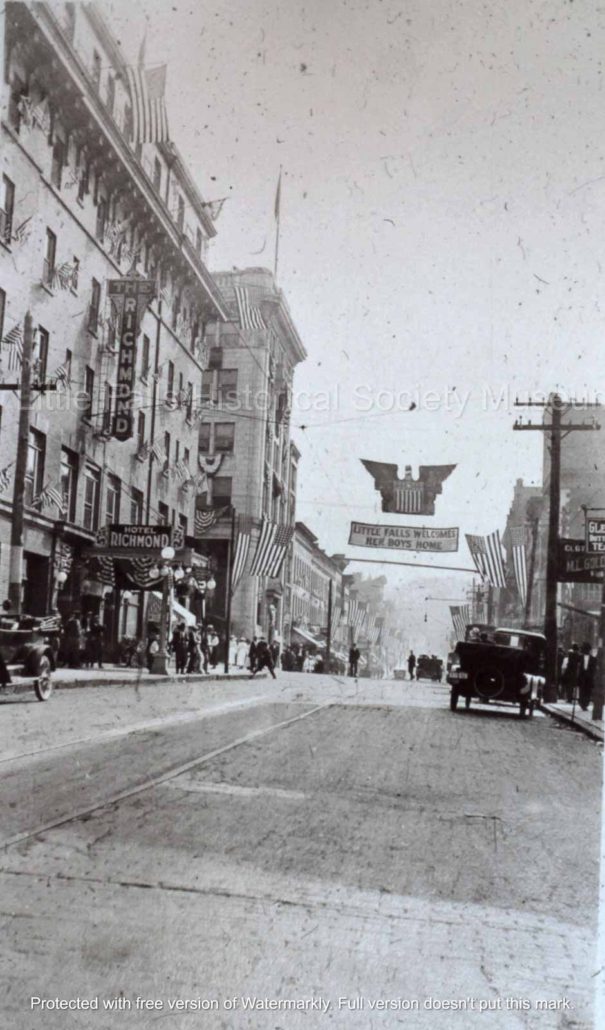 They traveled the Barge Canal on their way to New York City to protect the Atlantic Coast. On their overnight stay at Little Falls, ice had formed during the night, with the sub chasers being stuck in an ice jam by morning, forcing them to spend the winter at Lock 17.

During WWI, Stewart Jay Foote, from 104 Church Street, Little Falls, enlisted August 28, 1917, at Utica, N.Y., at the age of eighteen. He did his Naval training at the Great Lakes Training Station in Great Lakes, Illinois, from September 14, 1917 thru April 20, 1918. He was a Seaman 2nd Class of the U.S. Navy and was assigned to the subchaser SC-328, at Little Falls, N.Y. from April 20, 1918, thru November 11, 1918. Foote was then assigned to Annapolis, MD where SC-328 was used as a training vessel. Foote was discharged on February 28, 1919. His brother Carl Foote, Private First Class, of the U.S. Army, in the 9th Infantry Regiment, 2nd Infantry Division, was killed in action on June 23, 1918, in Chateau Thierry, France and is buried in the Aisne-Marne American Cemetery, Belleau, France. Stewart and his family left Little Falls after the war and moved to Binghamton, N.Y. to set up a family dry-cleaning business.

On June 29, 1919, in a solemn ceremony, Mayor Abram Zoller paid tribute to the twenty-five local men who died during their service in World War I. Seventeen had died from battle wounds and eight had died from the flu pandemic.

Edward Cooney’s written words from his book “History of the City of Little Falls, NY : 1961” , which gives us a peak into the past of what it was like here in Little Falls during WWI, are as follows:

“On April 2nd, 1917, four days before war was declared, Company B of Cohoes arrived in Little Falls to guard the canal and railroad against sabotage. At first, they were stationed in the Zoller block and later in Moreland Park, when the weather became warmer. Before the Draft of June 5th, a total of 108 local men had joined the services. Many of the local residents learned much about military service from visiting Company B in Moreland Park.

During that summer, a large number of submarine chasers passed through Little Falls on the Barge Canal, and several were tied up all winter at Lock 17. During the winter of 1917-18 there was a constant stream of army trucks passing through, and the drivers spent the night at the Y.M.C.A. As these were the days before roads were plowed, it took one fleet fourteen days to travel from Buffalo to Albany.

On January 18, 1918, the aldermen voted $2,500 to equip a company of Home Guards and the Y.M.C.A. members also raised $1,900. Remington single-shot rifles and equipment were purchased, and they drilled in the Y.M.C.A. Captain Guy Beardslee of East Creek, a retired army officer, was their commander.

With a daily paper the residents of Little Falls were kept well posted on events in the war area, as well as the activities of the various members of the armed services who wrote letters to the “Times.”

There was a false report of an Armistice on November 7, 1918, followed by the authentic one of November 11, four days later. On that morning there was a fire in the Cronkhite Opera House building which housed the Little Falls National Bank.

During the days there was a parade and general rejoicing. There were 634 men and women from Little Falls in the Armed Services in World War I, and 255 of them served overseas.
On July 3 and 4, 1919, a Welcome Home Celebration was held in Little Falls, and one of the important attractions was an army airplane, a DE Havilland -Four, piloted by Lt. Malcolm Allison. He flew in to participate in the “Welcome Home” celebration. There was a parade on July 4, with speeches in the park, dancing, a ball game, and fireworks.”

… and that ends Edward Cooney’s writings on Little Falls during the Great War.

Edward Cooney was a past City Historian for the City of Little Falls. Besides serving our city as a postal employee, he was instrumental in saving the Old Stone Bank Building as a depository for historical artifacts of Little Falls. Mr. Cooney also compiled over a 100 volumes of past historic newspaper articles from the 1880s through 1970s that pertained to the daily life of the past citizens of Little Falls, chronicling our city’s history. These books are one of our city’s most fascinating and important treasures. 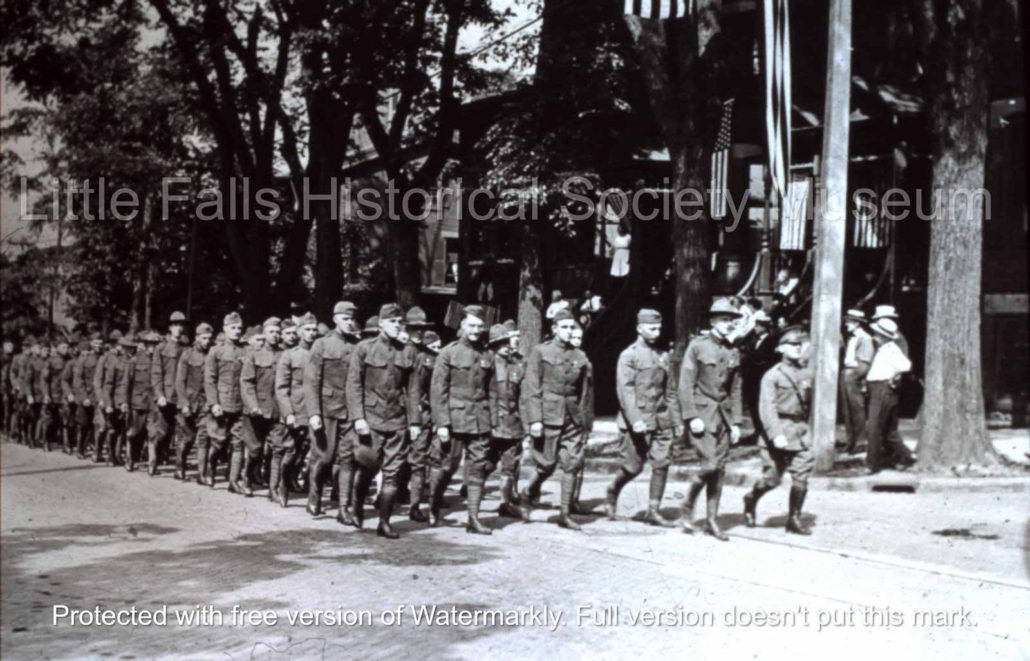 THIS DAY IN HISTORY “blurbs” come from newsprint articles within these books, which were recorded for the museum’s use by Louis Baum, JR., so that the Little Falls Historical Society Museum could share the history of Little Falls with its’ local citizens and beyond.

This day in history: December 16 in Utica, NY

This day in history: December 19 in Herkimer, NY
Scroll to top