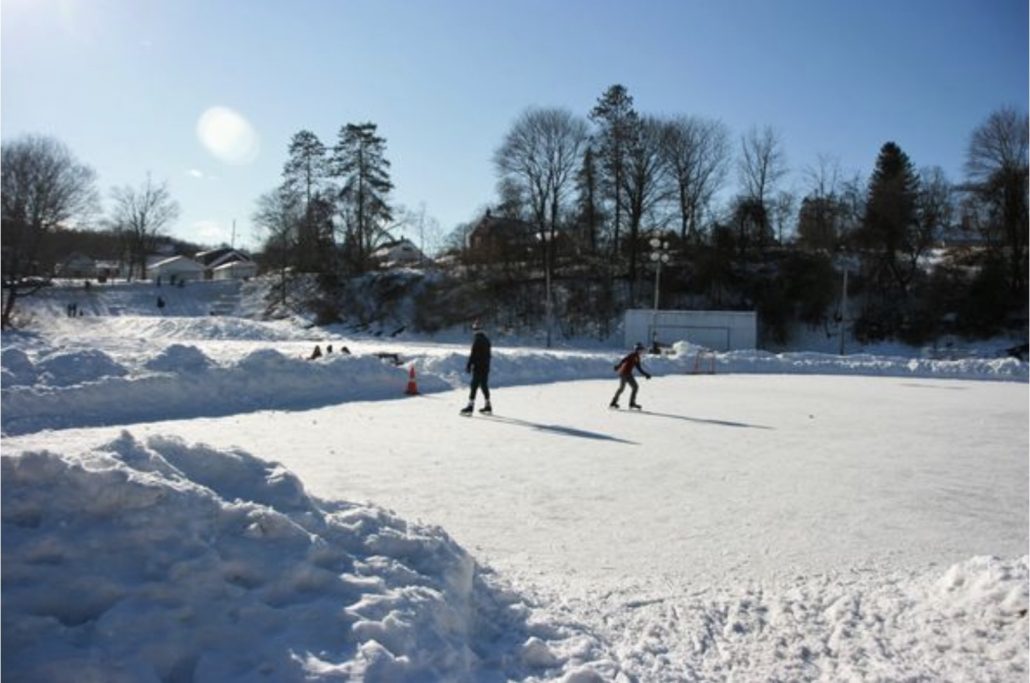 Ice skating at Monroe Street in 2021.

Decades before there was a Pine Ridge ski center in Salisbury or a Shu-maker Mountain ski area outside Little Falls, generations of Little Falls winter sports enthusiasts skied and sledded down the vertical drops that typify our steep, narrow Mohawk Valley topography. Others enjoyed skating on the frozen canal and ice rinks. Times were different in the age before television and computers provided time diversions and snowmobiles proved to be so popular.

CITY STREETS AND HILLS AND TRAGEDY

When snow conditions were right, city streets became the perfect downhill slopes for earlier generations of sledding and tobogganing thrill-seeker. East and West Monroe Streets were the favorite sliding destinations and “fourteen jounces,” on the left side of Manheim Street between Moreland Park and Ritter Road, was frequented in winter by sledders, tobogganers, and skiers. The area was less wooded and more glade-like in earlier days. It would be an understatement to say that “fourteen jounces” was a challenging run not for the faint of heart.

A February 5, 1892 Evening Times article advertised that an East Monroe Street toboggan slide was open for business with a “safe frozen water slide” allowing for “an exhilarating quarter mile long ride.” A pipe system had been laid in place previously that would allow for the sprinkling of the surface to make good sliding ice.

A January 1911 Evening Times article reported that Moreland Park had been the site of a number of outings during which mostly young people skied, snowshoed, and tobogganed. This was the first winter after the City of Little Falls assumed ownership of Moreland Park from the estate of Dudley Burwell.

Fifteen years later on December 12, 1926 a horrible tragedy occurred on East Monroe Street when John and Philip Casullo, Michael Bucenec, and Michael Lamanna, all of East Jefferson Street, were killed when their sleds were struck by a truck operated by an unlicensed driver. The gruesome details of this horrible accident and deaths of the “four lads” were reported in the local press.

This author’s father and his Loomis and Burwell Streets pals would climb uphill from the top of Ray Street in the late-1930s into Tony Lynch’s farm pastures and fields and ski down the steep hills back down to Loomis Street. A hardy group of young men indeed. My father’s wooden skis were seven feet long with bindings that accommodated up and down heel movement allowing for telemark-like turning. No metal edges. Skiers using this type of equipment employed a sort of hybrid combination of downhill and cross-country skiing techniques. Bamboo poles with leather baskets completed this early ski equipment.

One early 1930s newspaper notice alerted motorists to stop completely at all intersections and be on the lookout for sledders on city streets.

The same notice stated that “bobsledders at times attain the speed of 40 MPH sliding down East Monroe Street.” Sheer exhilaration! Would the police ticket these sled drivers for exceeding the city speed limit?

In the 1930s-50s, the steep drop-off of the south side of Route 169 / Dolgeville Road some distance beyond the overlook parking area was the proving ground for many sledders and skiers schussing downhill towards Bidleman Road. Sometimes, cars awaited these skiers and sledders on Bidleman Road to transport the winter enthusiasts back up to the top for another downhill run.

Years ago, my aunt Betty Gressler recalled walking from the family home on Burwell Street and out Loomis Street to the Dolgeville Road to go skiing on many occasions. Betty added that it was not uncommon for motorists to pick up skiers and drive them to that skiing and sledding slope. Before his death, Dick Van Gorder recalled tobogganing there and David Malone also remembers skiing down that same slope as a youngster in the early 1950s. Different times.

Louie Baum recalls a winter of 1946 sledding accident in which a long, “four kid” sled crashed at the intersection of Sherman and Burch Streets while sliding down hill from old St. Mary’s Cemetery. Louie’s sister Carol J. Baum broke the femur bone in her leg as a result of this accident.

Several decades later, the C+C Ski Shop was operated in the basement of a private home a bit further along the Dolgeville Road. This author’s first pair of “real downhill skies” was purchased in that ski shop, wooden skies with metal edges and Cubco bindings. Lace up leather boots and aluminum ski poles completed the equipment. Hart metal skies with Marker bindings and buckle Lange ski boots followed the next year. I was hooked.

Generations of south siders enjoyed similar wintertime thrills sledding down the various slopes stretching from Jefferson Street to Foley’s Gulf alongside Flint Avenue. The most challenging of these runs started on the path up to Otchie’s located directly behind the former Slovenian Hall on Danube Street and ended on West Casler Street. Failure to successfully negotiate this turn could result in a thirty-foot drop to the West Shore Railroad track bed below. Fortunately, no one ever crashed on this treacherous downhill glide according to Dave Talaba who provided the details for this paragraph. Thanks Dave.

Through the late-1950s through the mid-1960s, this author and his pals enjoyed many sledding outings on the hills in both present-day Ward Square and the always-icy run from West Monroe Street downhill towards the Little Falls ice skating rink. Lines of sledders would wait their turns for this quick blast of adrenalin-producing plunge. The most adventurous went down the same hill on ice skates at breakneck speed.

In the 1970s – 1980s many kids sledded down the Burrell’s Mansion abandoned roadway onto North William Street and on down to East Monroe Street. An exhilarating run.

And speaking of ice skating in Little Falls, other Historical Society writing series articles on this wintertime activity at both the Monroe Street skating rink and the Huddletown Ice Palace can be found on our website.

Perhaps the most dangerous of all winter sliding experiences involved grasping onto the rear chrome bumper of a car stopped at a stop sign and then sliding along a snow-covered icy street until the next stop sign.

The types of sleds being ridden in earlier days varied greatly in size and design. Single rider sleds were around four feet in length with metal runners and a front steering handlebar. Dragging feet served as brakes. Favorite models included Flexible Flyer, American Girl, Champion F-47, and King of the Hill.

There were at least two much longer homemade sleds used on Little Falls streets in the 1920s-30s. Both sleds could be ridden by at least six people, including a driver and brakeman. One sled was built in the Huddletown neighborhood and was often used for sledding down West Monroe and Church Streets. The other sled was owned by Eaton Eysaman and was often used on East Monroe Street and elsewhere. This sled was recently donated to the Historical Society after its discovery in the sub-basement of the old Eysaman home. There were far fewer cars on city streets in the days before every family had an automobile.

By the 1950s, more formal ski areas began to appear within a short drive of Little Falls.

PINE RIDGE SKI CENTER in Salisbury began in the early-1950s when landowner Charles Hodge built a backyard family ski hill with rope tow for his own children, neighbors, and friends. Pine Ridge opened officially for public skiing in December 1961 and remained open until 1976. At first, rope tows transported skiers uphill, but two J-bars were added in the mid-1960s. Six pine-lined trails with a 140-foot vertical drop led downhill to a 1100-foot base elevation.

Pine Ridge was a great place to learn how to downhill ski, but the limited vertical drop left most skiers looking for greater thrills and challenges elsewhere. 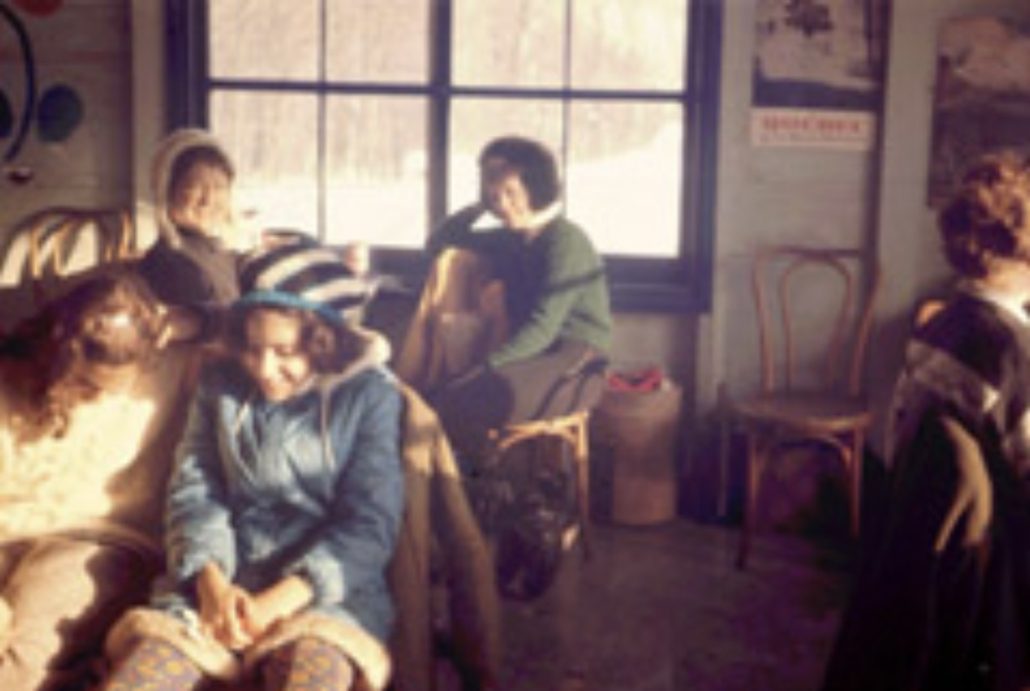 THE MOHAWK VALLEY SKI CLUB was once located in German Flatts off Route 168 / Creek Road about midway between Mohawk and Paines Hollow. The small ski area was established by some members of the Mohawk Valley Ski and Outing Club (founded in 1939) and others and was in operation from the early-1960s thru 1985.

The Mahaqua Farms property was purchased in 1960, a rope tow lift was installed, and a ski chalet-like structure was constructed where a pot-bellied wood stove provided heat and a place to eat and socialize. The group-owned facility was operated like a cooperative and was limited to seventy-five families at $55 / family annual dues. All work was performed by volunteer club members, many of them World War II veterans and their families.  A large addition was made to the original building in the early 1970s.

One of the best-known members of the Mohawk Valley Ski Club was Dr. Bernard Burke of Little Falls.

The Mohawk Valley Ski Club was more of a long ridge with varying degrees of steepness than a mountain. There was night skiing and the facility could be opened and the rope tow lift operated by a minimal number of members at any time. All members were expected to work cooperatively to operate the facility. Officers and directors were elected by the membership. Friendships established at the Ski Club have lasted a lifetime. 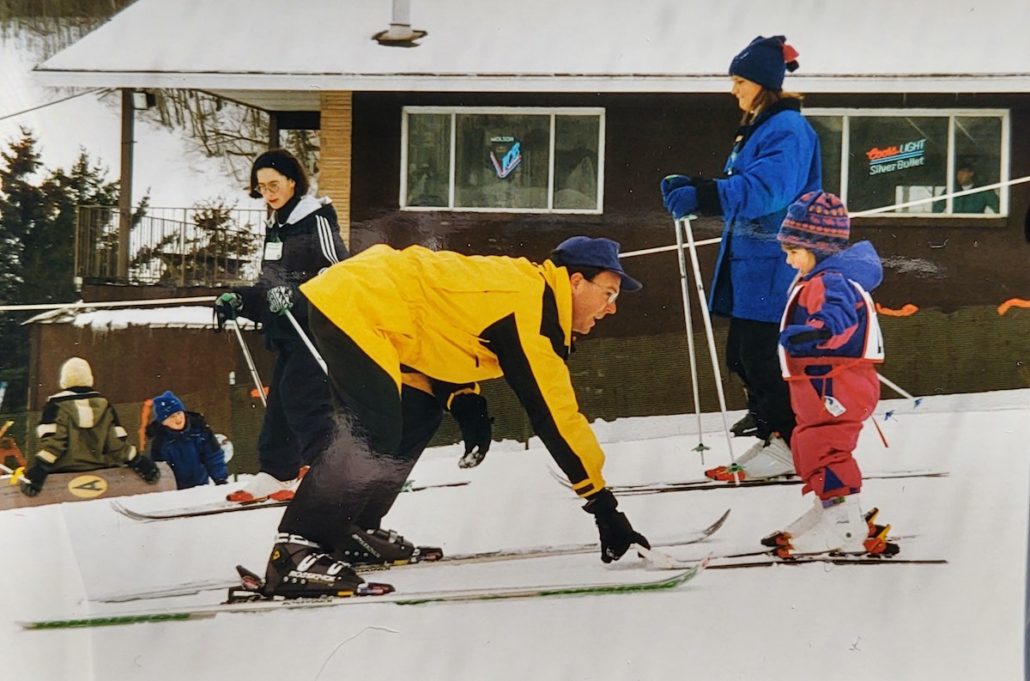 Of particular interest was the ski racing career of Jocelyn Van Gorder who grew up ski racing at Shu-maker Mountain. Jocelyn competed in the Empire State Games in Lake Placed three times and, in 2000-01, she was the girls Little Falls High School Section 3 ski champion in the giant slalom event. 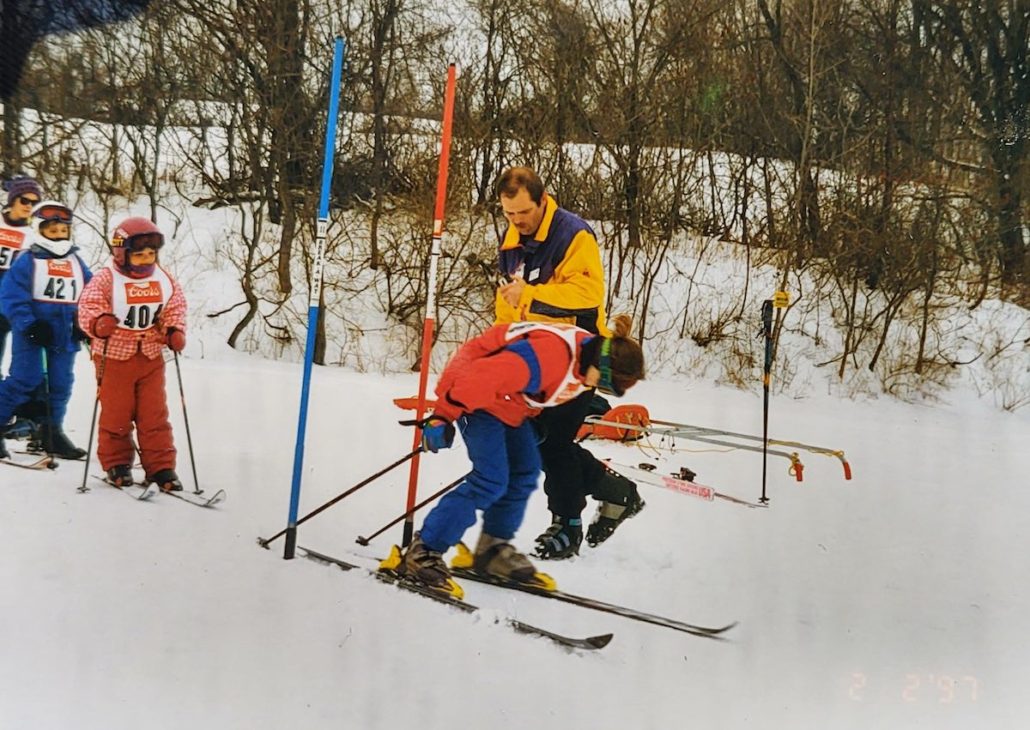 At one time, the Shu-maker Mountain barroom also had a lively vibe, at times featuring live music and a regular apres-ski crowd.

Shu-maker’s demise was the result of warmer winters with less snowfall and higher temperatures which did not allow for the proper operation of snowmaking equipment and the making of quality snow.

In this age of warmer winters and less snowfall, it would be most difficult to imagine such wintertime sporting activity written about in this article taking place in and around Little Falls today. In more recent years, the Empire State Trail nearby the Mohawk River and the hiking trails on city land between the old St. Mary’s Cemetery and the Municipal Golf Course are both used by cross-country skiers and snowshoers when conditions are right.

Great downhill skiing can still be enjoyed at Royal Mountain nearby Caroga Lake, at Oak Mountain in Speculator, at McCauley Mountain in Old Forge, and at Gore Mountain in North Creek. Whiteface Mountain in the High Peaks town of Wilmington, near Lake Placid, is the king of downhill New York ski challenges.

It is great that the Monroe Street skating rink has been operated in recent years when conditions permit.

More people are embracing the season and getting out for wintertime sun and fun, a great way to ward off the winter blues and cabin fever!

This day in history: December 19 in Herkimer, NY