This day in history: November 15

1777: The Second Continental Congress adopted the Articles of Confederation.

Each state retains its sovereignty, freedom, and independence, and every power, jurisdiction, and right, which is not by this Confederation expressly delegated to the United States, in Congress assembled.

Submitted to the states for ratification two days later, the Articles of Confederation were accompanied by a letter from Congress urging that the document…

…be candidly reviewed under a sense of the difficulty of combining in one general system the various sentiments and interests of a continent divided into so many sovereign and independent communities, under a conviction of the absolute necessity of uniting all our councils and all our strength, to maintain and defend our common liberties…

Monday, November 17, 1777, Journals of the Continental Congress. A Century of Lawmaking for a New Nation: U.S. Congressional Documents and Debates, 1774-1875. Law Library 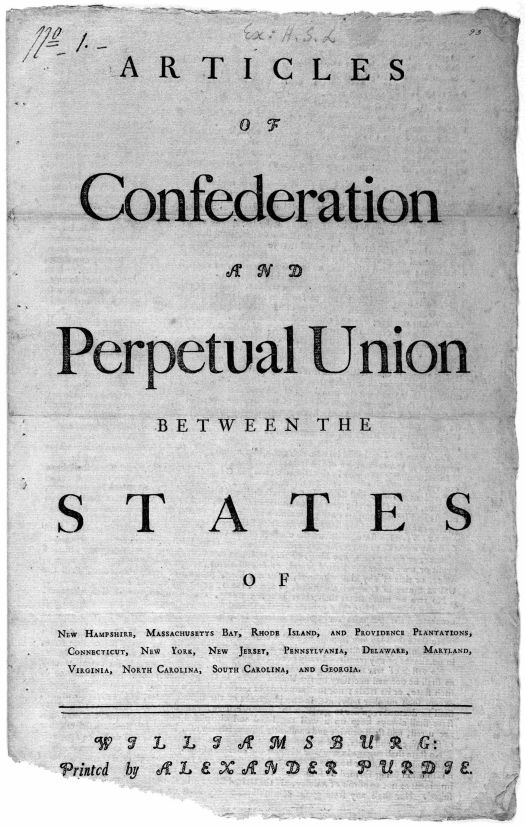 Although Congress debated the Articles for over a year, they requested immediate action on the part of the states. However, three-and-a-half years passed before ratification on March 1, 1781.

Still at war with Great Britain, the colonists were reluctant to establish another powerful national government. Jealously guarding their new independence, the Continental Congress created a loosely structured unicameral legislature that protected the liberty of the individual states at the expense of the nation. While calling on Congress to regulate military and monetary affairs, for example, the Articles of Confederation provided no mechanism to ensure that states complied with requests for troops or revenue. At times this left the military in a precarious position as George Washington wrote in a 1781 letter to the governor of Massachusetts, John Hancock.

Although ultimately supplanted by the United States Constitution, the Articles of Confederation provided stability during the Revolutionary War years. Most importantly, the experience of drafting and living under this initial document provided valuable lessons in self-governance and somewhat tempered fears about a powerful central government. Still, reconciling the tension between state and federal authority continued to challenge Americans from the 1832 nullification crisis to the Supreme Court’s landmark Brown v. Board of Education of Topeka decision.

Colgate University Repatriates More than 1,500 Funerary Objects to the Oneida...