This day in history: November 14

1732: The Library Company of Philadelphia signed a contract with its first librarian.

Founded by Benjamin Franklin and friends in November 1731, the library enrolled members for a fee of forty shillings but had to wait for books to arrive from England before beginning full operation. 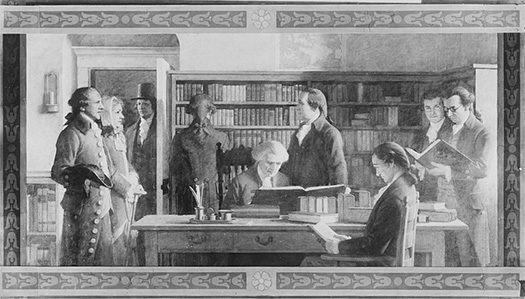 Many subscription libraries—founded to benefit academies, colleges, and other groups—were established from the late seventeenth through the nineteenth centuries. The Library Company of Philadelphia grew out of the needs of the Leather Apron Club, also known as the “Junto,” of which Franklin was a member. In addition to exchanging business information, these merchants discussed politics and natural philosophy, contributing to their requirements for books to satisfy their widespread interests. Volumes were purchased with the annual contributions of shareholders, building a more comprehensive library than any individual could afford.

Extract from minutes of the directors of the Library Company of Philadelphia, dated August 31st.,—directed to the President, was read, as follows:

Upon motion, ordered,
That the Librarian furnish the gentlemen, who are to meet in Congress, with the use of such Books as they may have occasion for, during their sitting, taking a receipt for them.
By order of the Directors,
(Signed) William Attmore, Sec’y.

Ordered, That the thanks of the Congress be returned to the Directors of the Library Company of Philadelphia, for their obliging order.

A letter of thanks to Veterans

Colgate University Repatriates More than 1,500 Funerary Objects to the Oneida...
Scroll to top