This day in history: November 16

1974: The Arecibo message is broadcast from Puerto Rico.

The message was sent during the dedication of a major upgrade to the Arecibo radio telescope in Puerto Rico on the afternoon of Nov. 16, 1974, and contained some very basic information about the human race. It included representations of the fundamental chemicals of life, the formula for DNA, a crude diagram of our solar system and simple pictures of a human being and the Arecibo telescope.

“It was strictly a symbolic event, to show that we could do it,” explains Donald Campbell, Cornell University professor of astronomy, who was a research associate at the Arecibo Observatory at the time. Arecibo Observatory is operated by the National Astronomy and Ionosphere Center, managed by Cornell University for the National Science Foundation.

The real purpose of the message was to call attention to the tremendous power of the radar transmitter newly installed at Arecibo and the ability of the telescope’s 1,000-foot diameter dish antenna to project a powerful signal into space. But many of those present took the event seriously, according to Harold Craft, Cornell’s vice president for services and facilities, who was then director of the Arecibo Observatory.

“We translated the radio-frequency message into a warbling audio tone that was broadcast over speakers at the ceremony. When it started, much of the audience spontaneously got up and walked out of the tent and gazed up at the telescope.” 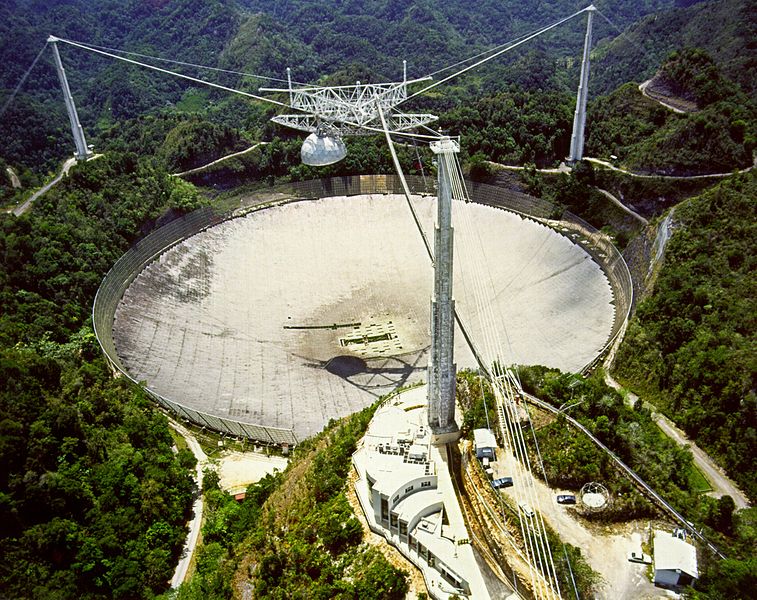 The Arecibo Observatory was the world’s second-largest, single-dish radio telescope.

The radio telescope had been at the center of groundbreaking astronomical research since its construction in 1963, including the discovery of the first planet outside of our solar system. Funding was drastically cut in February 2018 from $8 million to $2 million with management of the observatory being taken over by the University of Central Florida just a few months later the same year. Tragically, on Dec. 1, 2020 the science platform suddenly collapsed and despite strong support from the astronomy community to build a replacement facility, the National Science Foundation determined in 2022 it would not rebuild the iconic telescope. – Space.com

This day in history: November 17
Scroll to top