This day in history: November 30

Today is the last day of Native American Heritage Month. We would like to express deep gratitude and respect for the Mohawk and Oneida Nations of the Mohawk Valley, as well as all native nations throughout North America. Through events, videos, books and other online resources, these nations continue to raise their voices and share stories that illuminate the complexity of our shared history. One thing is clear—we have so much to learn. With a deeper understanding of a shared past, we have the potential to see a path toward a promising future.

Dating back as early as the 12th century, the Mohawk Valley has been home to the Kanienkehaka (“People of the Flint or Mohawk), who are themselves members of the Iroquois Confederacy of Nations or Haudenosaunee (Longhouse), and it was the conflicts that took place in the 1700’s which came with the European peoples that sent the Kanienkehaka from their lands; their villages and the resting places of their ancestors.

But our people always knew that there would come a day when we would return to the Mohawk Valley, and this prophesy was foretold many times throughout the decades, which turned into centuries.  Then in the 1990’s, while in the midst of troubled times, when many people were suffering the devastating effects of alcohol and all the problems that come with it, a new path was cleared for our return to this place where our ancestors lay to rest.  A new hope was realized in the hearts and minds of our elders who saw a path back to our home. – Kanatsiohareke Mohawk Community website

Elders like Tom Porter (Sakokwenionkwas, “The One Who Wins”) of the Bear Clan, who is the founder, spokesperson and spiritual leader of the Mohawk Community of Kanatsiohareke located in the Mohawk Valley near Fonda, teaches us so much about the importance of language and traditions. Must read books include And Grandma Said… Iroquois Teachings: as passed down through the oral tradition and Clanology: Clan System of the Iroquois.

The Oneida Nation, does so much to instill a collaborative culture impacts the Oneida community as well as regional neighbors.

“The Oneida legacy of strong partnerships began when the Oneidas became the First Allies of the United States and continues today as the Oneida Indian Nation joins forces with a variety of community stakeholders to build a strong Central New York. The Oneida Indian Nation has worked to develop a constructive relationship with their neighbors, understanding that the success of the region relies on a spirit of collaboration and mutual respect.” – Oneida Nation website.

The Shako:wi Cultural Center gives visitors an opportunity to learn more about the Oneida culture and traditions. The cultural center offers an outreach program where students can learn about the importance of The Great Law of Peace, language, traditional crafts and so much more. 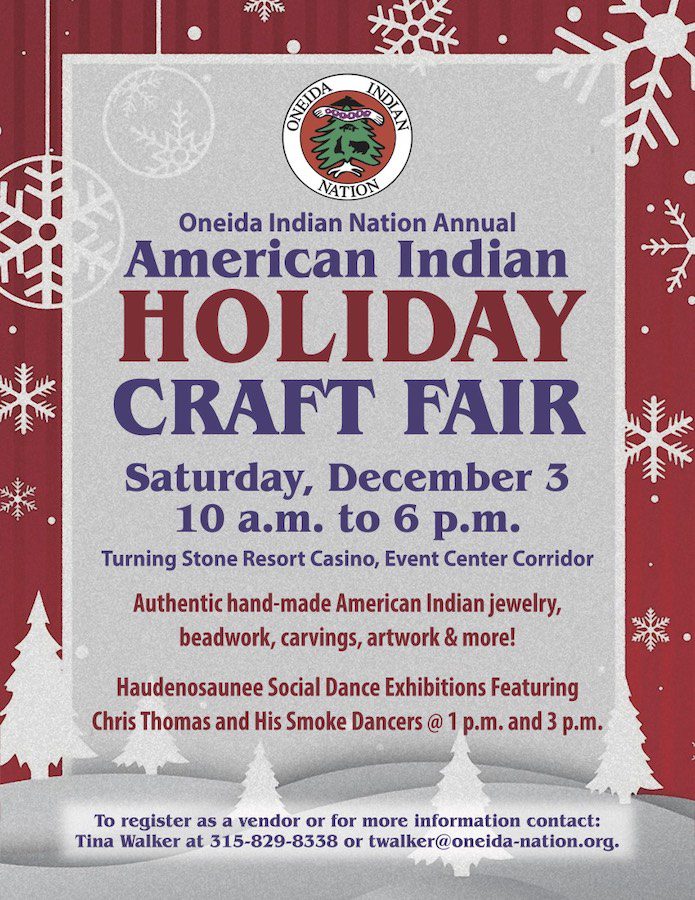 This day in history: November 29

This day in history: December 1
Scroll to top