The first train passed over the railroad to Dolgeville, and there were many excursions to High Falls Park the following summer. 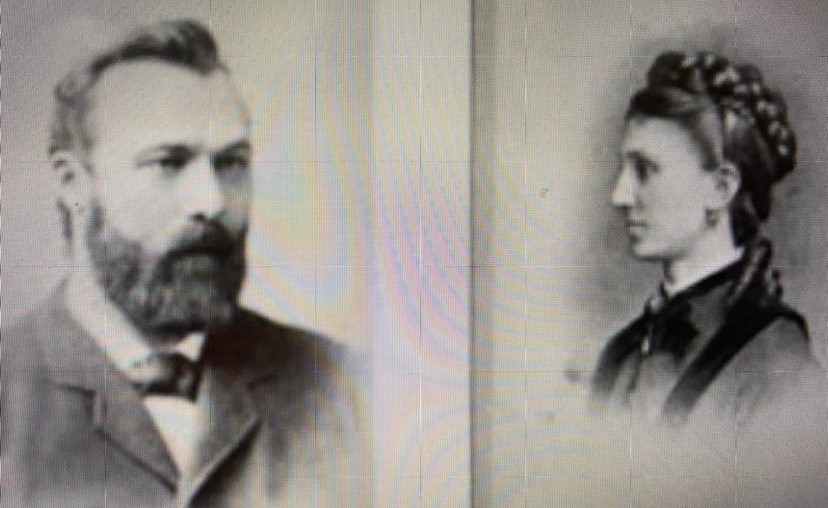 Dolge was born the 22nd of December, of 1848, in Chemnitz, Saxony, Germany. His father, Christian August Dolge, was a follower of Wilhelm Liebknecht’ Socialist Party and was imprisoned for five-years during the uprising of 1848. Alfred was schooled in Leipzig until the age of seventeen. That same year, in 1865, he joined his father’s piano manufacturing business as an apprentice, while attending night school to receive a diploma from the Free Masons and made his first visit to America. He returned to America in 1868, staying at the age of twenty, to work in a New York City business that imported piano parts. He met and married his wife, Auguste Anna, while in NYC.

He traveled to Brockett’s Bridge, NY in 1874, scouting for large groves of spruce trees. This specialty wood would be used in the manufacturing of sounding boards for the building of pianos. In the area of Brockett’s Bridge, Dolge bought over seventeen-thousand acres of forest within the Adirondack Park from 1880 – 1894. He gifted 500 of those acres, of the old Ruben Faville Farm, which was on the east side of the East Canada Creek that included the picturesque High Falls, as a park to the Village of Dolgeville. High Falls is at 1,020 feet above sea-level, with the village being at 791 feet above sea-level.

Alfred Dolge purchased the old Herkimer Tannery, along with seven acres of land, on April 15, 1880, from John and Marcy Watson for $7,000., where he began building various factory buildings of limestone, which were used to house the manufacturing of piano parts. Also, a felting mill was built for manufacturing of slippers, being the first in the United States, which eventually became known as Daniel Greens. He also built a sawmill and lumber yard, with the factory’s compound becoming known as the Dolge Company Factory Complex. Dolge’s progressive ideals led him to set up a pension and profit-sharing plan for his employees, that was totally funded by Mr. Dolge, himself. He also included sick pay and insurance for the benefit of his employees, which in later years, the German Government modified and adapted Dolge’s social security like forum for use in Germany. Dolge advertised back home in Germany, enticing Germans to immigrate to Dolgeville, to become employees within his factories. In 1880 the population in Brockett’s Bridge was around 325 inhabitants, within a few years the population had grown to over 2,000 citizens, with many being German immigrants. My great, great grandfather Louis Hermann Grimmer, who was born in Leipzig, Saxony, Germany was one of those immigrants. He sailed aboard the SS Polynesia in 1887, as a shoemaker for Dolge’s felting mill.

By 1881, the citizens of Brockett’s Bridge, firstly known as Green’s Bridge, applied to Washington to be incorporated as a village and to change its name to that of Dolgeville. Alfred Dolge was the first village president for Dolgeville.

Alfred Dolge and his family gave so much to the community of Dolgeville. They financed city streets to form the village, water and sewage systems, a fire department, a library, a gymnasium, social halls, a newspaper, and two schools , with Dolgeville being the first in New York State to have a kindergarten.

The immigrant Italian railroad workers, who were hired by Dolge, built a bread oven in 1891 on the east side of the City of Little Falls, in the woods between the most eastern end of Loomis Street and Route 167 North. The oven was built of brick and was contained within walls of stone, with the structure being 16 feet in width by 20 feet in length, with an overall height of 6 feet. The Italian Community Bake Oven baked large quantities of bread, with putting out up to 150 loaves a day. The oven was the central hub for the Italian laborers, providing the main staple of their diet. They sheltered in tents and huts within a transient work camp in the immediate area of the oven. The Italians were not welcomed by the villagers and their job was completed in 1893. In 2006, the Italian Community Bake Oven was granted placement on the New York State and National Registry of Historical Places. In 2009, Preserve Our Past, a Little Falls non- profit group, along with former NY State Senator James L. Seward, secured a $15,000 grant to preserve the oven, one of Little Fall’s historic treasures. The structure received masonry repairs and a new roof.

On December 14, 1892, the first train traveled on the railroad, with members of the Liederkranz Society, which was a German organization devoted to cultural and social exchange as well as the sponsorship of musical events, laying claim as being the first gentlemen to ride over part of the railway. The railroad line was 10.8 miles in length and was built at a cost of $539,430.56. Its path led east from Little Falls, passing Manhiem Center, then on to Ingham Mills, then heading north on to Dolgeville, then continuing on to go farther north to Salisbury Center, where it stopped at the northern terminal. There were a couple of extensions to this line, one being the Dolgeville-Salisbury Railroad that went from Dolgeville to Irondale, which was bout three miles in length, to the iron mines of the Salisbury Steel & Iron Company and other iron ore mills within the vicinity, with this extension ending in 1913. There was also the private line of the Jersey Field Lumber Company, the Jersey Field Branch, that moved felled timber from the Jerseyfield Patent to Salisbury by an extended rail line to the Little Falls-Dolgeville Railroad, from 1914-1919.

By December 31, 1893, the Little Falls- Dolgeville Railroad line was completed. During this period, train excursions were very popular. Flat cars were modified into open air cars for these excursions, for the enjoyment of the passengers. Many runs took place over the previous summer to High Falls Park, where a fare of twenty-five cents was charged for the round-trip excursion from Little Falls Train Depot. The Little Falls Dolgeville Railroad was purchased by the New York Central and Hudson River Railroad Company on July 24, 1906, for $382,687.72. The last train on this railroad was on July 15, 1964, by engine No. 847, a 600 hp Switcher.

The East Canada Creek was first used to generate hydroelectricity in 1897. Dolge financed Edison’s secondly built electric dynamo, which was the first dynamo to be run by waterpower, giving electricity to his factories and to the village of Dolgeville.

In March of 1898, Mr. Dolge was amid financial difficulties, being forced into bankruptcy, with his assets being double of his debt, which ended his dreams of building an industrial village. In May of 1898 he left Dolgeville for California, where in 1900 Dolge wrote the book “History of a Crime” that outlined the events that led up to his bankruptcy trial, with him losing control of the Dolge Company Factory Complex.

In Dolgeville, CA he conducted a similar business in 1903 with a partner and was forced out of the business in 1910. In 1911, Alfred authored another book, “Pianos and Their Makers”. Alfred Dolge died on January 5, 1922, in Milan, Italy, while on a transatlantic tour. He is buried in the Dolgeville Cemetery, Dolgeville, NY.

In 1902, on October 25th, the Little Falls Police removed a box containing fifty pounds of a high-powered variety of explosives, from the cellar of a home on Whited Street. The explosives had been stored there since the building of the Little Falls-Dolgeville Railroad.

This day in history: December 14

This day in history: December 16 in Utica, NY
Scroll to top