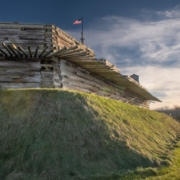 The ceremony commemorates and remembers the important turning point when the British and their allies abandoned their attack on Fort Schuyler/Stanwix.

After three long weeks, the British and their allies abandoned their attack on Fort Schuyler/Stanwix, leaving the American forces within as the victors. However, even with the immediate threat removed, the Continental Army throughout New York was still under British threat. Programs throughout the day will focus on what happened as the British retreated, but didn't surrender.

For more information you can visit the Fort Stanwix National Monument.

You can find more events near you at Mohawk Valley Today Events.