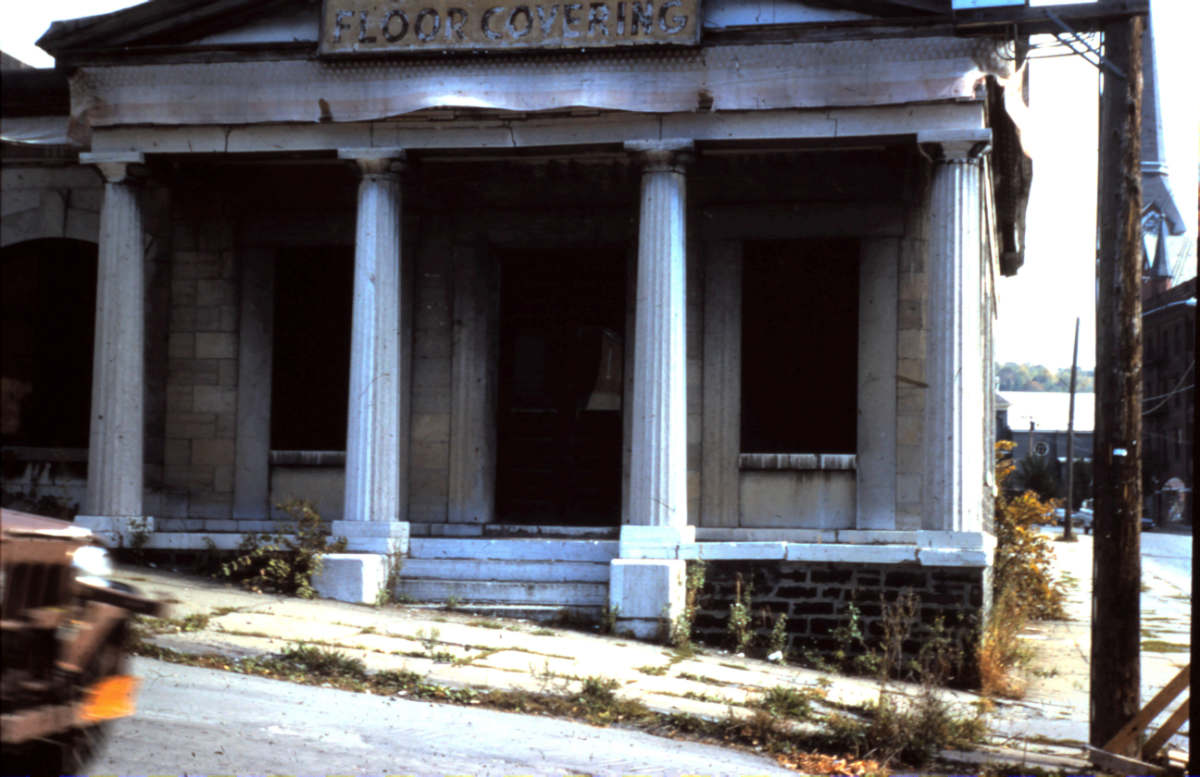 A view of the Old Bank Building as it appeared prior to scheduled demolition.

This article was first published in the Little Falls Historical Society Writing Series.

The wisdom of historic preservation has not always been a given. The desire by some to preserve old buildings and places is at times pitted against those who would rather “start over” with new construction.

In the early 1970s, many Little Falls residents wanted to tear down the Old Bank Building in the name of progress to make way for more parking spaces while a handful of early preservationists fought hard to preserve the iconic Greek Revival architectural treasure. The primary purpose of this article is to close out our BEYOND OUR BICENTENNIAL soon-to-be published book and focus on that structure once more.

“A sense of identity springs from knowing where you come from. It feels good to walk down the same streets your grandfather did, especially if there’s something about those streets that still looks like it did back then. That’s part of the reason people have taken to the streets, armed with paint scrapers, plumb bobs, old blueprints and memories: to rediscover their own town’s origins”

So opened the 1973 publication OLD GLORY: A PICTORIAL REPORT ON THE GRASS ROOTS HISTORY MOVEMENT AND THE FIRST HOMETOWN HISTORY PRIMER, published by the America the Beautiful Fund. The book celebrated and sought to serve as a guide for others, reporting on nationwide efforts of citizens to salvage “the history of American before it falls down, is paved over or dies with the lost memories.” How did the Old Bank Building and Little Falls make their way into the pages of this publication along with seventy-five other cities and towns from twenty-nine states?

Additionally, separate grants of $1000 and $6950 were awarded to the Little Falls Historical Society in 1973 as an organization that “gives aid to community projects to protect the quality of the natural, historic and manmade environment.” The uniqueness of an 1833 bank constructed of native stone and dressed limestone details was being recognized and efforts to preserve the structure were being lauded.

In 1970, the Old Bank Building was placed on the National Register of Historic Places.

An earlier article from the 2020 writing series, entitled “Old Bank Building Reaches a Milestone” captures much of the community drama that unfolded around this building. Controversy abounded between preservationists and those who chose not to see beyond the then present condition of the Old Bank Building. An article authored by Louis Baum in the book TOWARDS OUR BICENTENNIAL, and found on the Historical Society’s website, focuses on the detailed history of the Old Bank Building.

Shortly after the 1970 designation, the Utica Daily Press published an article entitled “Little Falls Bank Stirs Dispute” in which its author Richard Williams (Clinton historian) closed his piece with the question “… Will the bank building that began in the 1830s … fall prey to the cries of progress or will history and a unique remaining commercial bit of the Greek Revival style be maintained, rehabilitated and eventually used by Little Falls residents in the future?” 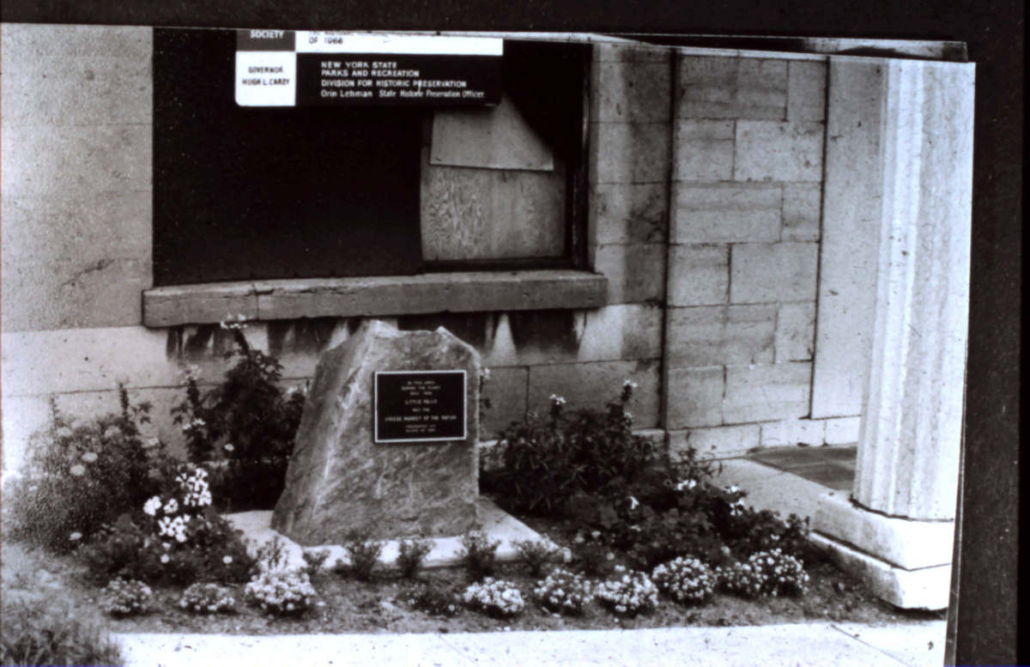 Front left of building- The stone commemorating the bank was donated by the Class of 1982 after National Register placement and during restoration work.

Dueling letters to the editor, articles reporting on the controversy, and competing ads in the Little Falls Evening Times illustrated the contentious debate on this issue. The Urban Renewal Agency and the then current city administration, along with a portion of Little Falls residents, called for demolition. On the other side of the issue were Historical Society members and other preservationists who fought to save the building from the wrecking ball. A compromise between new construction and historic preservation was eventually accomplished within the same city block.

The immensity of building restoration lay ahead, the real battle had just begun.

The Old Bank Building was in dilapidated condition and what followed was a protracted 1976 through the early-1980s complete restoration project carried out by devoted volunteers and skilled craftsmen alike. Since its 1985 official opening, the Old Bank Building Museum has been the repository for Historical Society archives and artifacts collected, stored, and displayed by a succession of committed Society members.

One purpose of this article is to help acquaint the current generation with the huge task of renovation that our forbears undertook and accomplished in turning this rundown historic gem into the vibrant community resource that it is today. May this awareness yield appreciation and a strengthened resolve by this and future generations to do their part to carry forward the torch and continue in the footsteps of those who preceded us by protecting much community history. 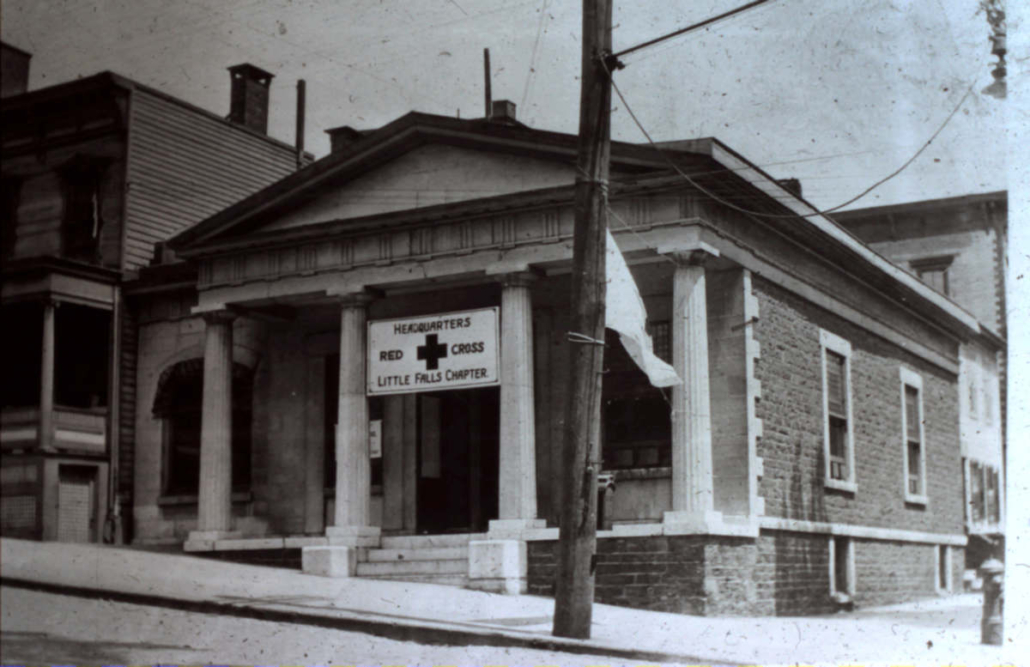 Past use of building.

The “then and now” pictures that follow provide a visual testimony of the task that had been undertaken and accomplished by those undaunted foundation members. The task of maintaining the 188-year old building is an ongoing community obligation.

The seventy-five articles contained in the Beyond Our Bicentennial book reflect in part the expanded scope of activity that the present generation of Society members has undertaken in recent years.

In summary, the role of the Little Falls Historical Society has expanded beyond our museum itself to have broader community educational impact. The founding Society members would much approve of this expanded activity as a continuation of their vision, persistence, and seminal work.

“It is said, at its best, preservation engages the past in a conversation with the present over a mutual concern for the future.

NOTE: Additional photos can be found on the LFHS website. Furthermore, due to the fact that the exhibits change, some of these newly updated pictures will also change, however the exhibits will remain on our website.

Pat Frezza-Gressler is a member of the Little Falls Historical Society. Learn more about the Mohawk Valley’s  Historic Little Falls, New York, by visiting LittleFallsHistoricalSociety.org featuring an online writing series, historical timelines and events, exhibits, and so much more.

The Palatine Germans in Search of a Land to Call Home