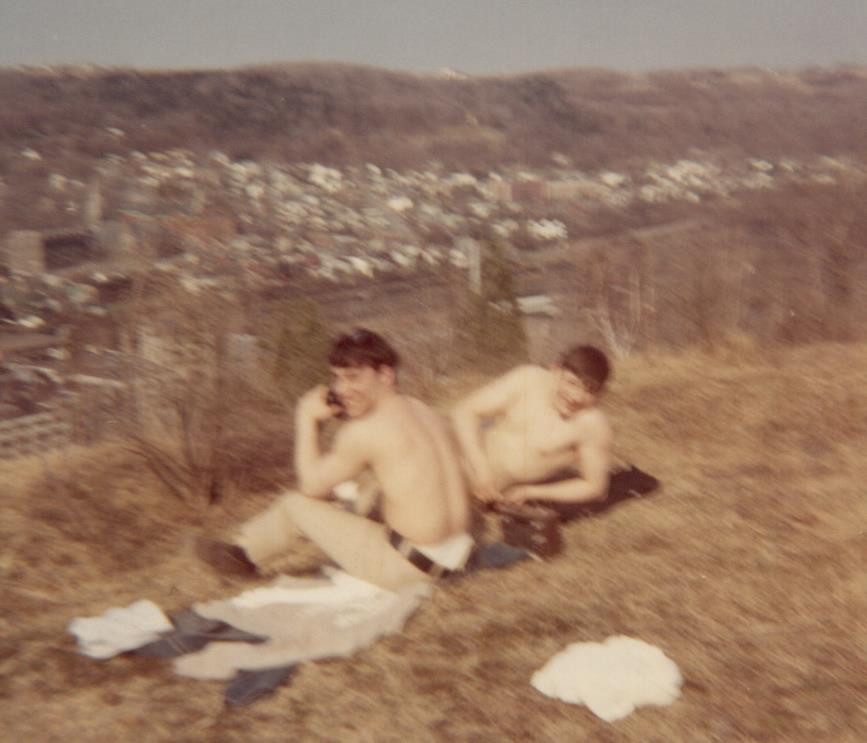 For the past 8 years I have had the privilege of conducting a history and storytelling tour, “Growing Up on The Southside 1957 – 1970.”

It is important to understand how and why this tour started. It was to have a better understanding of why the “Southside” of Little Falls, NY has such a very special and perhaps unique place in the hearts of each and all who have had the privilege of growing up there during the “baby boomers” period, and those who followed, up until perhaps the late 1970s, when it’s aura and special ethnic qualities faded away.

When I left Little Falls to go to college, I and my college friends shared stories of our childhood and hometowns. I was surprised that many of my new friends found my stories of growing up on the Southside of Little Falls fascinating. Even more surprising was when I mentioned these discussions to my Little Falls “North Side” friends. They admitted that they could never quite understand why “Southsiders” shared a special bond and sense of pride and brotherhood. They suggested that I do a walking tour during Canal Days and share these stories of family, friends, brotherhood, and tradition that in some ways were unique to the South Side. The result was a challenging 3.5 to 4.5 miles of walking that included unpaved dirt paths, uneven surfaces, and climbing up and down open stair gratings. The storytelling helped people to endure the moderate to vigorous physical activity.

On the Southside, “family” was not limited to blood relatives.

The ethnic roots, neighbor proximity and social relationships resulted in a shared “community.” One tradition that each and all the various ethnic groups on the Southside shared was a love of good food and homemade cooking. The variety of foods was interesting. Sometimes my friends and I would eat at each other’s houses, where we got to try an ethnic dish made with recipes various families brought with them from the “old country.” Some families had gardens and shared what they had grown with others. 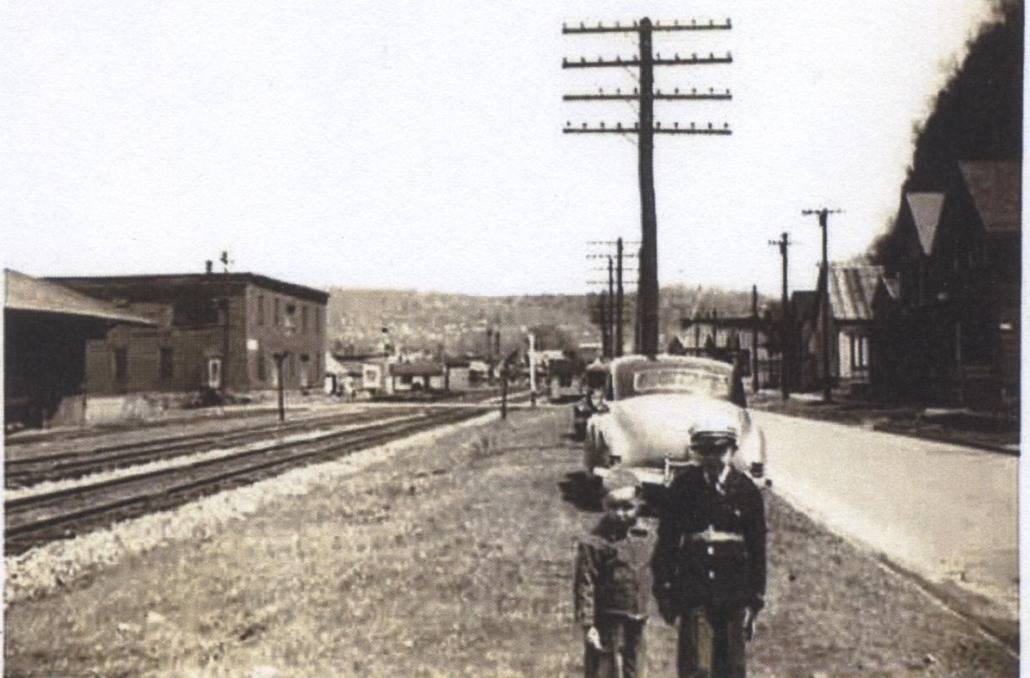 “Henry and Fee Verri on west Flint Ave with the “Feed Store” and “Red Barn” across the railroad tracks around the mid 1950’s. (Photo from Henry Verri)”

The adults during that time took an interest in and monitored the behavior of the kids growing up in the neighborhood. A song during this time had a line that said, “the night has a thousand eyes.” Well as kids growing up, we soon realized that this was true for us. Regardless, we made earnest efforts to find places to get away, out of sight, be unseen, and do whatever crazy thing we could think of, and challenge each other to top it. The names of some of these “get away” places included: Ochies, Beer Can Mountain, Becker’s Junk Yard, Nash’s Coal Yard, the Milk Station, and the Stone Crusher. During our teenage years Masle’s Cigar Store and Viola’s Pizzeria were two popular hangouts located near each other on South Ann Street.

My closest Southside friends were Larry Eysamen, Brucie Izzo, Henry Verri, Randy Gerdin, Sauro Franchi, Mark Lawrence, Ralph Lamanna, Gary Barone, Phil Green, Dicky and Ron Ciano, Tony George, and Danny Bucenec. Whenever we crossed over the railroad tracks to go to the Northside, we almost always went in a group. While growing up on the Southside during the period of 1957 until 1970, we made friends for life.

Almost all my friends on the Southside at that time were from a blue-collar, second-generation immigrant family- mostly Italian, Slovenian, Slovak, Polish and German.

Our grandparents, and as children our parents, had survived the depression and then WWII. Those experiences enabled them to develop an excellent work ethic that, though unspoken, they passed down to us. As kids, we all had chores and jobs we had to do to earn an allowance. We mowed lawns, shoveled snow, tended gardens, ran errands, and some of us had paper routes. We also collected bottles for deposit, and newspapers, metal, cloth, etc., which we took to the two local salvage yards, the Red Barn, or the Flint Ave extension junk yard, where we got pennies per pound. Summer farm work baling hay or picking strawberries or other vegetables provided a great incentive for young impressionable teenagers to stay in school and get good grades, in the hope of going to college and graduating to get a good paying job. I was one of 3 or 4 Southside Little Falls Evening Times newspaper boys, a job from which I learned many life lessons that helped prepare me for success when I went to college and later during my career. This will be covered later in a separate article on the history of some Southside carriers from the 1930’s through1970 and how the experience shaped their lives.

As kids we spent most of our time outdoors, playing sports, and participating in the various games and activities, and looking for adventure, as described in the Southside articles about growing up in the 50’s before me, and the 70’s after me. We joined Cub and Boy Scouts. We began meeting Northsiders when we played Minor and Little League baseball and Pop Warner football, and when we went to the Rialto Theater to see the free weekly movies that were sponsored by the Main Street merchants.

Some say my generation of the 60’s was the age of “Sex, drugs and rock and roll,” but with us it was more in the order of rock and roll, sex, and drugs, with the last two being minimal for most of us until college. Music was another big part of the Southside culture. Many of our families, especially our grandparents and parents, shared a great appreciation of and love for music and singing. Many made their own instruments or saved pennies to buy one, and often formed ethnic bands to perform and play their music at various events and gatherings for holidays, weddings, anniversaries, birthdays, and parades. The two I remember most were the Columbus Day celebration for the Italians, and the Band from the Slovenian Home.

As a paper boy, especially during the summer when the windows were open, I would hear the music coming from each house being played on record players, practiced on instruments, and occasionally on a few ethnic stations on the radio.

My generation experienced the growth of “transistor radios,” especially when they became affordable and portable.

Summer nights during these years were spent hanging out in Columbus Park, across from Angie’s Store on West Jefferson Street, where we all listened to the latest rock and roll music and practiced dancing to the popular songs of our era. Motown hits, the British Invasion (Beatles, Rolling Stones, Herman’s Hermits, Bee Gees, etc.) and California music including the Beach Boys, Jan and Dean, the Safaris, the Lovin’ Spoonful, etc. This was when the latest dance craze had a name such as the Twist, the Watusi, the Locomotion, the Wooly Bully, etc. Martha and the Vandellas had a hit “Dancing in the Streets” and that was exactly what we were doing!

For many of us, “rock and roll” along with the dancing and long hair, became the departure point from our parents, who frowned upon our behavior, music, and style of clothing. They also questioned our rebellious  attitude toward adults and people of authority in general, as well as many of the things that they held dear.

These traditions are still remembered, discussed, and laughed about every three years when a “Southside Reunion” is held on a Saturday in September. Hundreds of Southsiders return to Little Falls to enjoy the food, the company of family and lifelong friends, and to rehash tales of days long gone bye.

Gary Staffo is a member of the Little Falls Historical Society.

Local and Regional Art in the Spotlight at Fenimore’s Art by the Lake Eve...

“Icons of Rock, Blues, and Soul” to Congregate at Hartwick’s Yager Mu...
Scroll to top