Eagle Down by John Frazier

Donnie Coffin was somewhat of an enigma. Those who remember him recall him as an easygoing guy, but not many people have vivid memories of him. He was described as having problems with authority, yet he left high school without graduating at a time when the war in Vietnam was raging to enlist in the Army and become a paratrooper, where authority was paramount. The rule of thumb in jump school is to blend in with the rest of the guys and not make any mistakes; otherwise, you’d have a drill instructor inches from your face screaming about your male sexual inadequacy, or how your mother was incapable of producing a functional human being. Then you could expect to do some push-ups. A lot of them. And this was the best-case scenario of “treatments” handed out. You don’t get any more hard-core in the Army except for Ranger school, which is their equivalent to the Navy SEALs. Those are the men with the colored berets; the most famous being the Green Berets because of the song and the movie. It was hardly an environment for somebody who rebelled against authority.

Donald Allen Coffin was born on May 6, 1949, the third child of Edwin Sr. and Nancy (Tisi) Coffin.  Donnie spent most of his life on Murphy Road, farm country between Little Falls and Dolgeville. For a country boy, his was pretty much a normal childhood for the times – most of his education was with the Dolgeville Central School system and working on Silvernail’s farm in the summer. Donnie was an avid reader, especially science fiction, and if nothing else was going on, you would always find him with a book.

In the summer of ‘66 he pulled a prank on his mother, telling her that he had a job in Little Falls and having her drive him into the city each morning. It took her quite a while before she was to find out that there was no job; he was going into town to see a girl!

His interests during the adolescent and teen years became more varied, possibly, like most teens, when he tried to “find himself.” Of course, like most young men in Dolgeville, he played football for Coach Bill Bynon. He was also on Hank Brown’s “Twist-A-Rama” program from 1965 to 1966, a TV program on Channel 2 that mimicked American Bandstand. He also followed in his brother Ed’s footsteps and took a role in the Little Falls High School play “Damn Yankees” in 1966, playing a photographer. Donnie lived with his cousin Leon, Jr. and wife Edie and their family off Paradise Road so he would be able to transfer to Little Falls High for his senior year, where he also played tackle for the football team. 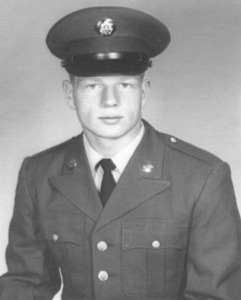 Donnie dropped out of high school right after football season ended in his senior year. He and Ronnie Montana were going to enlist in the Army on the Buddy Program, but Ronnie was still in high school, so the Army couldn’t take him; however, they were more than happy to accept Donnie. On November 29, 1966, Donald A. Coffin became property of the U. S. government.

Donnie first went to Fort Dix, N. J. for 8 weeks of Basic Training. From there he was assigned to Fort Benning, GA. After that it was on to Fort Ord, CA. Finally it was Fort Campbell, KY, home of the 101st Airborne Division, the division made famous by the HBO series “Band of Brothers.” He was able to come home for Thanksgiving, 1967, the last time that he was with family before leaving for Vietnam. 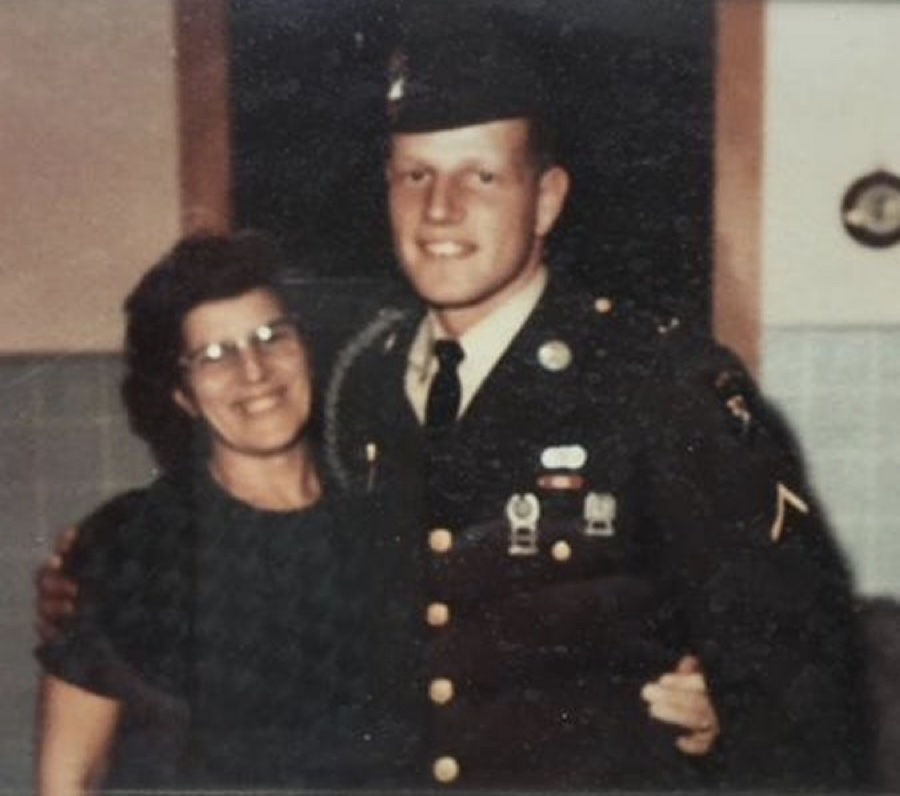 A proud mother and her son, Thanksgiving, 1967.

Donnie was remembered by classmates and fellow soldiers alike as a mellow, easygoing, light-hearted guy. Charles Allen, a fellow GI who served with Donnie both at Fort Campbell and in Vietnam said, “Donald was so upbeat that he even made the mindless agony of Vietnam some how not so bad (you really kinda needed somebody to make you laugh).” 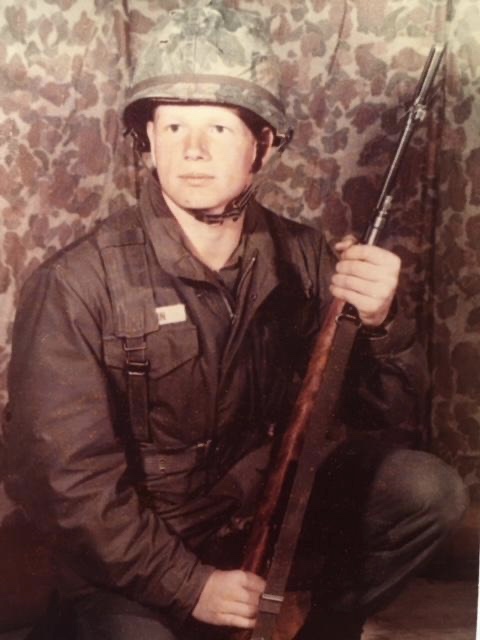 Donnie at Jump School with a parachute and M-1 rifle.

Donnie arrived at the Bien Hoa airbase just outside of Saigon on December 16, 1967, and from there went further north to join Alpha Company, First Battalion, 502nd Infantry of the 101st Airborne Division, known as the Screaming Eagles. 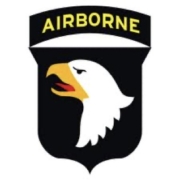 Upon arriving at the 101st Headquarters, recruits were required to attend Screaming Eagles Replacement Training School (SERTS) to acclimate soldiers to warfare in Vietnam. Not long after SERTS, on December 27th to be exact, Donnie was already “in the bush” and involved in a fire fight. When a Chi-Com (Chinese Communist) grenade was thrown into the foxhole he was standing in, he quickly jumped out, rolling backwards down a hill to avoid incoming enemy fire. He rolled right into a punji pit, a hole filled with bamboo sticks stuck in the ground with sharpened ends facing upwards, and usually coated with feces to compound the wounds with infection. 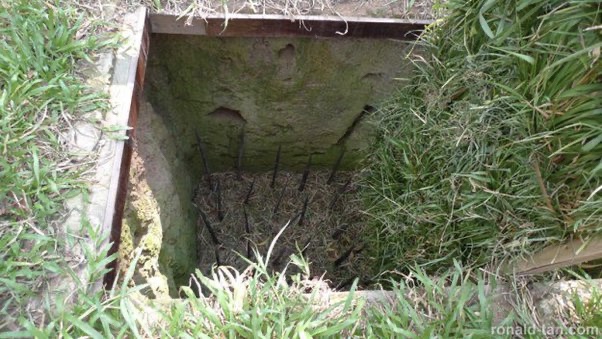 During his hospital stay he was visited by entertainer Bob Hope and shook his hand. He proudly wrote home that he had earned his first Purple Heart, as his father had earned two in World War II. He was released from the 12th Evac Hospital after about a 10-day treatment and sent back to his unit.

Donnie was back in the bush for less than two weeks when his unit was sent back to their base camp in Cu Chi for a little bit of R&R (rest and relaxation). While relaxing and watching a movie, the base camp came under rocket and mortar attack. GI’s quickly went inside bunkers, which were small structures protected by layers of sand bags. However, on January 19, 1968, the lives of Pfc. Donald Coffin, Sgt. Joseph Gerwatowski of Jersey City, NJ, and Pfc. James R. Moore of Washington, D. C. were snuffed out when a projectile, most likely a Russian 122mm rocket, went through the ground and up into the bunker. 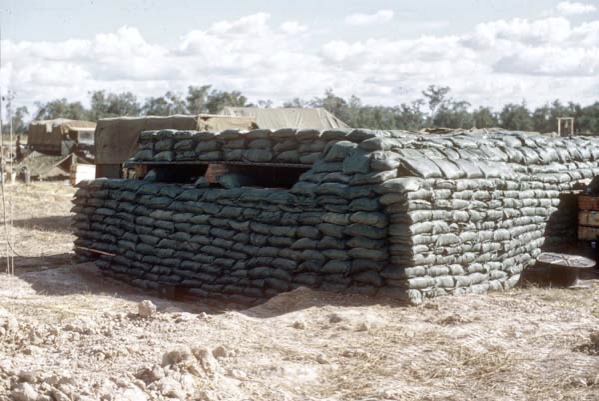 In the irony of all ironies, the men survived fire fights in the bush, but perished when they returned to what was supposed to be the relative safety of their base camp.

Mr. and Mrs. Coffin were informed of their son’s tragic death on the following day, Saturday, January 20th. His parents received a telegram that day stating,

“The Secretary of the Army has asked me to express his deep regrets that your son, Pfc. Donald Coffin, died in Vietnam, 19 January, 1968, from wounds received while at base camp, when the area came under hostile mortar and recoilless rifle attack. Please accept my deepest sympathy. This confirms personal notification made by a representative of the Army.”

The telegram was signed by Major General Kenneth G. Wickham.

An Army representative also went to the Coffin residence on Saturday to personally notify the parents of their son’s death.

In a tradition usually maintained by the military, Donnie was posthumously promoted up one rank to Corporal (E-4). His remains arrived stateside at Dover AFB in Maryland in a clear, plexiglass-covered coffin. Escorting the body was SP4 Anthony Costanzo of Dolgeville, a personal friend of Donnie’s who was also serving in Vietnam. Funeral director Thomas Konchar, whose funeral home was at the present site of Enea Funeral Home on West Monroe Street, was in charge of arrangements. Mr. Konchar received a telegram stating that the remains would arrive at Hancock Field in Syracuse at 9:40 P.M. on January 24th, but the plane was late and never arrived until around 3:00 A.M. on January 25th.

Viewings for Donnie were held on both the afternoons and evenings of January 25th and 26th, and until the time of the funeral on Saturday. Members of local VFW #4612 and American Legion #31 paid their respects on Friday evening. Many faculty members and students from Dolgeville Central School paid their respects as a group. Little Falls Mayor Ted Wind attended as well. 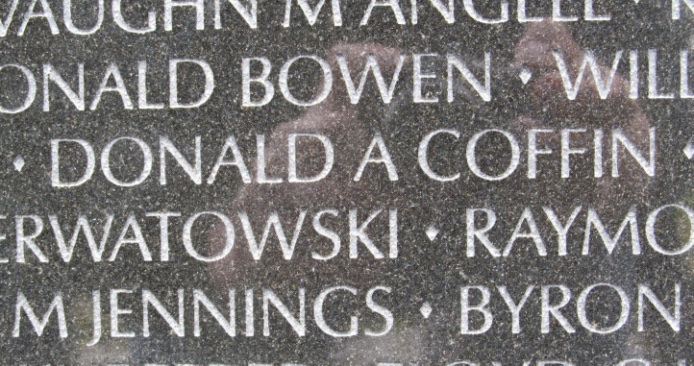 Services were held for Cpl. Donald A. Coffin on Saturday, January 27th. A solemn Requiem High Mass was celebrated by Rev. Almerico DiCerbo, Pastor of St. Joseph’s Church in Little Falls. He was assisted by Rev. Robert Reed, assistant at St. Joseph’s Church as Deacon, and Rev. Raymond Piechocki, Pastor of Sacred Heart Church in Little Falls, serving as Sub-Deacon.

Mayor Wind announced that the period of January 25th through February 5th be decreed as a period of mourning for Cpl. Coffin, and that the flag at City Hall be flown at half-mast on Saturday, the day of his funeral. He urged local merchants to fly their flags at half-mast on that day also.

Military personnel from Camp Drum served as Military Honor Guard, standing at attention while the flag-draped casket was borne between them as it was brought out of the funeral home, as well as in and out of the church. Members of DeCarlo-Staffo ITAM Post #8 who served as honor guard standing at the casket on Saturday morning were Joseph Lambert, Jerry Naple, and James Staffo. The Camp Drum Honor Guard fired three volleys over the vault, after which taps were sounded. The American flag was then folded by military escort SP4 Anthony Costanzo and Capt. Thomas Martin, and then presented to Donnie’s father. Mrs. Coffin was so distraught, she said, “This flag is all I have from my son.” Cpl. Donald A. Coffin’s were placed in the vault at the “old” St. Mary’s Cemetery, awaiting burial at St. Mary’s Cemetery on the Herkimer Road in the Spring.  Pall bearers were Charles Balderston, Anthony Rich, Jr., Paul Maniacek, Daniel Geraty, and Richard Coffin, all of Little Falls, and Ronald Schuyler of Dolgeville.

He was survived by his parents, brothers Marine Cpl. Edwin, Jr., James and Gary, two sisters Sharon and Lorraine, his maternal grandparents, Mr. and Mrs. Leonard Tisi, and paternal grandmother Mrs. Rose Coffin, as well as many aunts, uncles and cousins.

The Coffin family, Dolgeville, Little Falls, the friends Donnie made during his all-too-brief time with us, and any other lives he may have touched were left with a void. That empty space was created because Donnie made a choice. He wanted to be a paratrooper, knowing full well that meant he would be sent to Vietnam, be given some of the riskier tasks that the Army was given and fight in some of the more difficult battles. The North Vietnamese Army and the Viet Cong feared the 101st Airborne Division, and the 101st was proud of that reputation. Men like Donnie Coffin have given us the freedom that we have today; a freedom that at times almost seems to be taken for granted and/or trampled on.

Today, on the 55th anniversary of Donnie’s passing, please take a moment to think of him. Maybe even whisper a sincere “thank you.” 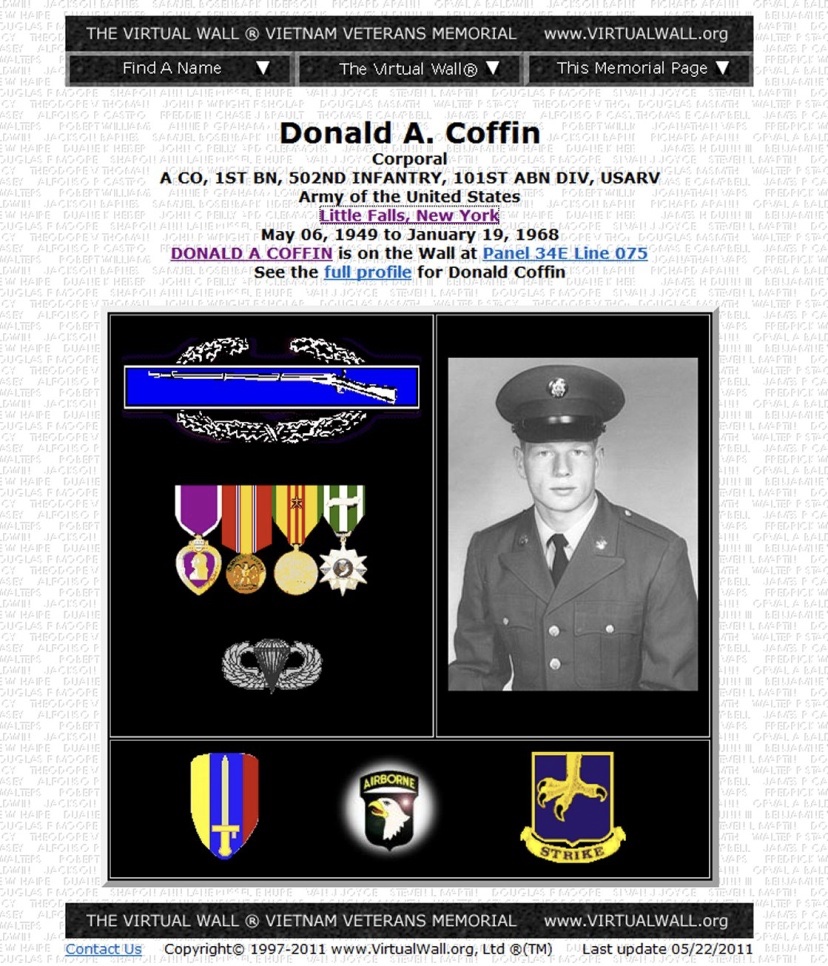 1 The Little Falls Evening Times reported that Pvt. Coffin died in a mortar attack; however a mortar shell travels in a high, parabolic arch and detonates upon impact. The weapon that killed these three men had to have a flatter trajectory to go under the bunker before detonating. A mortar shell is incapable of doing that. I’ve discussed this issue with other Vietnam combat vets, who all agree.

I would like to express my deep appreciation to Ed Coffin, Jr., brother of the deceased, as well as Dave Krutz and Ralph Renzulli for their assistance in researching this article.

John Frazier served with the 101st Airborne Division in Vietnam, and is a member of the Little Falls Historical Society.

Land Where The Partridge Drums
Scroll to top