This day in history: November 28

1843: Hawai’i is formally recognized as an independent nation.

On November 28, 1843, at the Court of London, the British and French governments formally recognized Hawaiian independence. The “Anglo-Franco Proclamation”, a joint declaration by France and Britain, signed by King Louis-Philippe and Queen Victoria, assured the Hawaiian delegation:

Her Majesty the Queen of the United Kingdom of Great Britain and Ireland, and His Majesty the King of the French, taking into consideration the existence in the Sandwich Islands (Hawaiian Islands) of a government capable of providing for the regularity of its relations with foreign nations, have thought it right to engage, reciprocally, to consider the Sandwich Islands as an Independent State, and never to take possession, neither directly or under the title of Protectorate, or under any other form, of any part of the territory of which they are composed.

The undersigned, Her Majesty’s Principal Secretary of State of Foreign Affairs, and the Ambassador Extraordinary of His Majesty the King of the French, at the Court of London, being furnished with the necessary powers, hereby declare, in consequence, that their said Majesties take reciprocally that engagement.

In witness whereof the undersigned have signed the present declaration, and have affixed thereto the seal of their arms.

Hawaiʻi was the first non-European indigenous state whose independence was recognised by the major powers. The United States declined to join with France and the United Kingdom in this statement. Even though President John Tyler had verbally recognized Hawaiian independence, it was not until 1849 that the United States did formally.

November 28, Lā Kūʻokoʻa (Independence Day), became a national holiday to celebrate the recognition of Hawaiʻi’s independence. The Hawaiian Kingdom entered into treaties with most major countries and established over 90 legations and consulates. 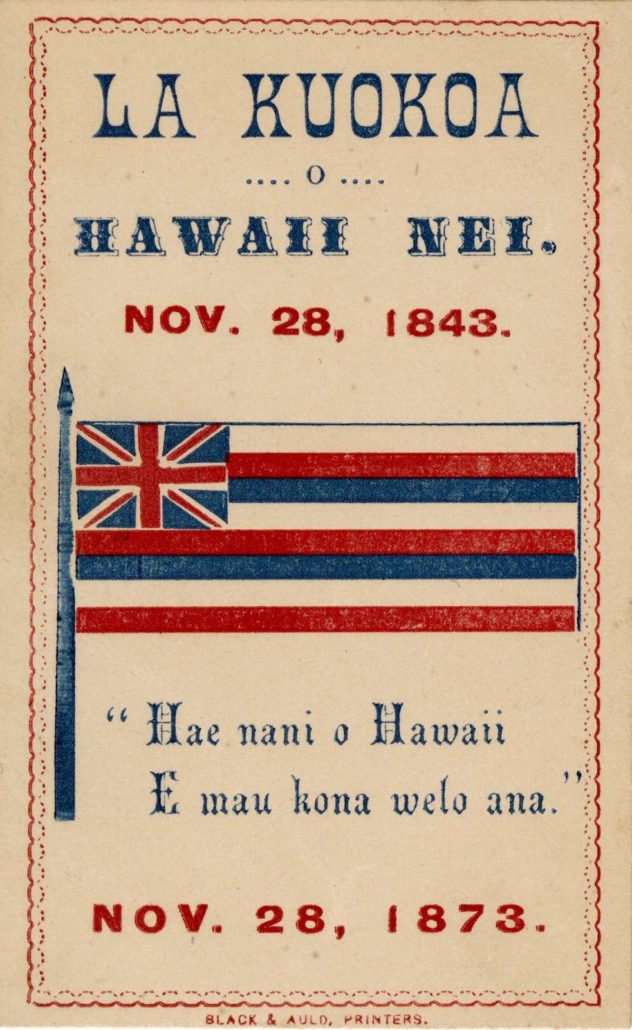 The Kingdom of Hawaii was later overthrown beginning January 17, 1893 with a coup d’état orchestrated by American and European residents within the kingdom’s legislature and assisted by the United States military.

While there was much opposition and many attempts to restore the kingdom, it became a territory of the US in 1898, without any input from Native Hawaiians.[5] Hawaii became a US state on March 18, 1959 following a referendum in which at least 93% of voters approved of statehood.

The Apology Bill and the Akaka Bill

In the past decades, the growing frustration of Native Hawaiians over Hawaiian Homelands as well as the 100 year anniversary of the overthrow, pushed the Hawaiian sovereignty movement to the forefront of politics in Hawaii. In 1993, then President Bill Clinton signed the United States Public Law 103-150, known as the “Apology Bill”, for US involvement in the 1893 overthrow. The bill offers a commitment towards reconciliation.

US census information shows there were approximately 401,162 Native Hawaiians living within the United States in the year 2000. Sixty percent live in the continental US with forty percent living in the State of Hawaii. Between 1990 and 2000, those people identifying as Native Hawaiian had grown by 90,000 additional people, while the number of those identifying as pure Hawaiian had declined to under 10,000.

Senator Daniel Akaka sponsored a bill in 2009 entitled the Native Hawaiian Government Reorganization Act of 2009 (S1011/HR2314) which would create the legal framework for establishing a Hawaiian government. The bill was supported by US President Barack Obama. Even though the bill is considered a reconciliation process, it has not had that effect but has instead been the subject of much controversy and political fighting from many arenas. American opponents argue that congress is disregarding US citizens for special interests and sovereignty activists believe this will further erode their rights as the 1921 blood quantum rule of the Hawaiian Homes Commission Act had done. In 2011, a governor appointed committee began to gather and verify names of Native Hawaiians for the purpose of voting on a Native Hawaiian nation.

In June 2014, the US Department of the Interior announced plans to hold hearings to establish the possibility of federal recognition of Native Hawaiians as an Indian tribe.

Re-Thinking Thanksgiving: A Native American Perspective on an American Holiday...

This day in history: November 29
Scroll to top