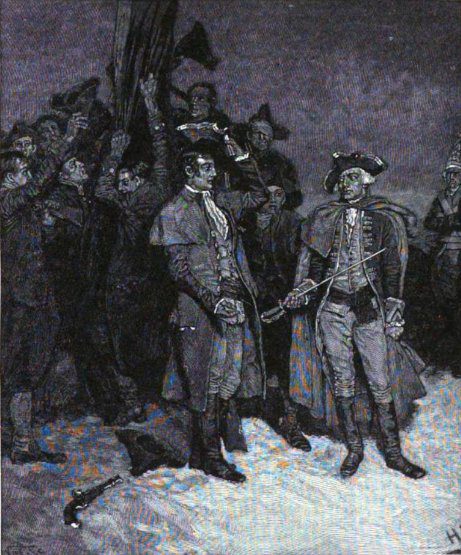 In a sign of the times, “several hundred men overpowered the small British garrison at Castle William & Mary, now Fort Constitution, New Castle, and removed quantities of military supplies. These raids, set off by Paul Revere’s ride to Portsmouth on Dec. 13, were among the first overt acts of the American Revolution.” (New Hampshire Union Leader)

“Thus it will be seen that when Paul Revere brought his message on December 13, 1774, from the committee in Boston to Mr. Samuel Cutts of the Portsmouth committee, announcing that troops were to be sent to reinforce the fort, and bringing information, also, of the removal of the military stores in Rhode Island, and of the king’s order in council prohibiting the exportation of gunpowder and military stores to America, the people were in a state of mind ready for revolt. Mr. Cutts immediately called the committee together, and they proceeded to plan for the capture of the powder upon the following day.”

The capture of Fort William and Mary, by Charles Lathrop Parsons

The group of hundreds of men easily overpowered the six manning the fort. After taking control of the fort, the British flag was lowered and approximately 100 barrels  gunpowder were removed leaving only one barrel in the fort. Later, on December 26, 1774, Governor Wentworth issued a proclamation:

“Whereas, several Bodies of Men did, in the day time of the 14th and in the Night of the 15th of this Instant December, in the most daring and rebellious Manner invest, attack and forcibly enter into his Majesty’s Castle William and Mary in this Province, and overpowering and confining the Captain and Garrison, did, besides committing many treasonable Insults and Outrages, break open the Magazine of said Castle and plunder it of above One hundred Barrels of Gunpowder, with upwards of sixty Stand of small Arms, and did also force from the Ramparts of said Castles and carry off sixteen Pieces of Cannon, and other military Stores, in open Hostility and direct Oppugnation of his Majesty’s Government and in the mostatrocious Contempt of his Crown and Dignity:

I Do, by Advice and Consent of his Majesty’s Council, issue this Proclamation, ordering and requiring in his Majesty’s Name, all Magistrates and other officers whether Civil or Military, as they regard their Duty to the King and the Tenor of the Oaths they have solemnly taken and subscribed, to exert themselves in detecting and securing in some of his Majesty’s Goals in this Province the said Offenders, in Order to their being brought to condign punishment; And from motives of Duty to the King and Regard to the welfare of the good Peo- ple of this Province ; I do in the most earnest and solemn Manner, exhort and enjoin you, his Majesty’s liege Subjects of thisGovernment, to beware of suffering yourselves to be seduced by the false Art & Menaces of abandoned Men, to abet, protect or screen from Justice any of the said high handed Offenders, or to withhold or secrete his Majesty’s Munition forcibly taken from his Castle ; but that each and every of you will use your utmost endeavor to detect and discover the Perpetrators of these Crimes to the civil Magistrate, and assist in securing and bringing them to Justice, and in recovering the King’s Munition ; This Injunction it is my bounden Duty to lay strictly upon you, and to require your Obedience thereto : as you value individually your Faith and Allegiance to hisMajesty, as you wish to preserve that Reputation to the Province in general ; and as you would avert the most dreadful but most certain Consequences of a contrary conduct to yourselves and Posterity.” – The capture of Fort William and Mary, by Charles Lathrop Parsons

First train passes over the railroad to Dolgeville
Scroll to top