“Around the back and up the stairs…” That’s how our mornings began.

The first time I heard that instruction, from my Uncle Morgan Carrig, it was about 5:00 a.m. on a Saturday morning, circa mid-June 1964. My older brother Kevin, who had previously enjoyed all the benefits and privileges of employment as a milk delivery boy for Morgan’s Dairy, was “unavailable” – no doubt due to a Friday night dance at Filipski’s bowling alley on the South Side. 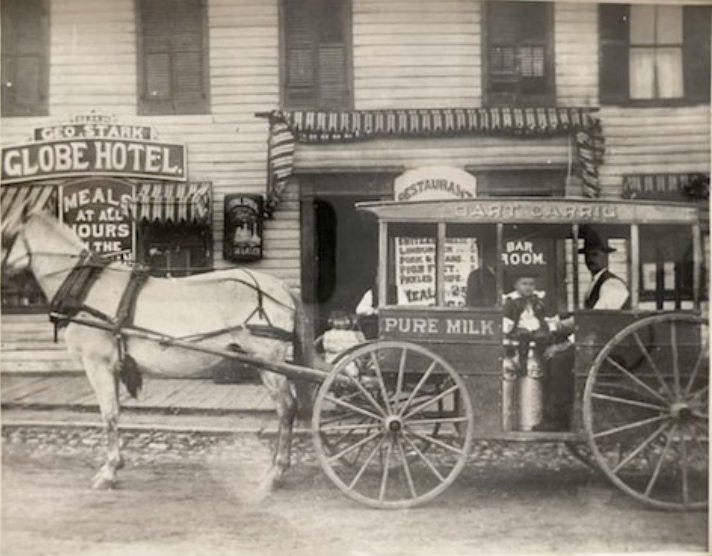 “Around the back and up the stairs” were Morgan’s terse, pre-dawn directions for many of the customers’ milk boxes for the delivery.

Often accompanied by modifiers such as: “Two quarts homo [homogenized], one regular [pasteurized] (in those days, cream could still be purchased as separated to the top of the bottles) and a ½ pint of heavy” [cream]. Those were his codes. And we hoped that Morgan’s guess for that day would match the paper note sticking out of the empties waiting for pick up, so we wouldn’t have to make a second trip.

It was a rite of passage for Carrig teenaged boys, and often their friends, to do a year or two “tour of duty” working the milk route. Thus, in the late 60s, my cousin Blaise Carrig, Gordy Ackerman and I became the milk delivery boys for Morgan’s Dairy. We were awakened every morning at 4 a.m., not by alarm clocks, but by a telephone call from Uncle Morgan with an all too cheerful greeting of “Rise and shine!” (well, every day except Sunday).

In that era, Little Falls had a number of family run milk delivery businesses: Restante’s and Lynch’s Dairies come to mind, as well as Sterzinar’s Hyla’s, and Brundjar’s  Of course, now the home milk delivery business (and youth delivery occupation) are defunct; and, like so many personal service and shopping experiences, are now remnants of the much more manual lives of a bustling past, both in Little Falls, New York and throughout the valley and everywhere.

As part of the economics of things to come, eventually Morgan took over other local milk delivery businesses.

To us, that meant a 45 minute earlier start for the added home milk deliveries. So that on school days, we began our route work with Morgan at 4:30 a.m. and finished by 8:00 (more or less) in order to get to school by 8:30 – which we rarely did. Uncle Morgan and Theodore Lyons, the assistant school principal, became very accustomed to conversations triggered when we reported late for school because of some problem with the truck, the snow, the rain.

As his route grew to cover the whole city and adjoining communities, Morgan had a bevy of workers: Initially, Kevin, Blaise, Gordy and I assumed the duties, and shortly thereafter David Carrig, Jeffrey Carrig, Keith Carrig, Steve Carrig, Ken Carrig, and Paul Carrig all shared stints as Morgan’s milk boys. Eventually, Morgan’s son William “Bill” Carrig took over the bulk of the work, even as he worked another full-time job. The inter-generational list of delivery workers expanded even further when Morgan’s grandson Jay Carrig and his granddaughter Rachael Carrig joined the ranks and assisted with Morgan’s milk deliveries. Morgan’s morning call to them was equally simple: “Up & at ‘em!”2

If there was a universal dread of those delivering milk for Morgan’s Dairy, it was when he announced: “Time to put the chains on!” That meant on the first hill of every cold, snowy, winter day, Morgan would pull over and we’d go through the process of crawling under the truck and chaining the tires. We were amazed at the times when he would crawl under himself to make a connection we couldn’t make. And he could do that with a Roi Tan cigar, lit and mounted. He did earn the nickname we had for him: “Roi Tan Dan”.

Morgan always held his cool even on Saturdays, when the prior night’s dance, game, party, or girlfriend converted us to less-than-desirable (and timely) workers. He put up with our shenanigans, our late rising, the ice we’d put on the driver’s seat on hot summer days, the multidimensional nonsense of teenagers who sometimes felt they had better things to do the evening before, and the day of, than working on the milk route. Never did we ever hear a cross word from him. He was patient, kind, friendly, and generous. And he maintained that demeanor throughout the years each of us worked for him.

An astute and dedicated businessman, Morgan knew and cared about every one of the hundreds of customers on his route. He knew, for example, on the holidays how many people would be at their homes: how much butter, cottage cheese, eggnog, eggs, and milk they would need. If we started to jump out of the truck to trudge up Ray Street, he’d eyeball our carrier and adjust what we needed to bring (so we wouldn’t have to make a 2nd trip). He was faithful to his customers, he was funny, generous, kind, and (we can’t say it enough) tolerant.

Those times were also the heyday of a variety of personally owned and “unchained” local businesses, where the character of the owner (and his or her family) were as significant as the product. The “family business” format was really part of the fairly vast, fundamental structure of business in Little Falls in those years. Many of the businesses in town proudly carried their family names: Bride’s Cigar Store, Goldstein’s, Ackerman’s, Walach’s, Cody Brothers, Ottman’s, Lamanna’s, Scarano’s Bakery, Walt’s Grill, McCarthy’s Drug Store, Clemons’ Drug Store, Petkovsek’s, to name just a few.

Morgan Carrig is not just a fond memory, he’s a prime example of the character of a closeknit community.

Where else do generations keep growing and changing, yet still hold on to a past that binds and guides us through our years? In Little Falls, we are indeed fortunate all around: in our environment, in our history and our future; and have much to be thankful for.

And with Morgan’s retirement, thus ended the long history of home milk delivery in Little Falls that had started with a horse-drawn wagon operated by my great-grandfather, Bart Carrig, and our grandfather, John Carrig, who, in the photo is sitting on a milk can in front of the old Globe Theater building.

*Special thanks to Blaise Carrig, Gordy Ackerman, ‘and William “Bill” and Karen Carrig for ideas and support, as well the editorial staff of the Little Falls Historical Society for their input and edits.

Bart Carrig is a member of the Little Falls Historical Society.