On Wednesday, November 9, the Oneida Indian Nation and Colgate University held a repatriation ceremony during which more than 1,500 funerary objects and cultural artifacts were transferred to the Nation from the collections of the university’s Longyear Museum of Cultural Anthropology. President Brian Casey offered an official apology on behalf of the university for past acquisitions of these items for its collections and expressed Colgate’s commitment to continuing repatriations in the future. 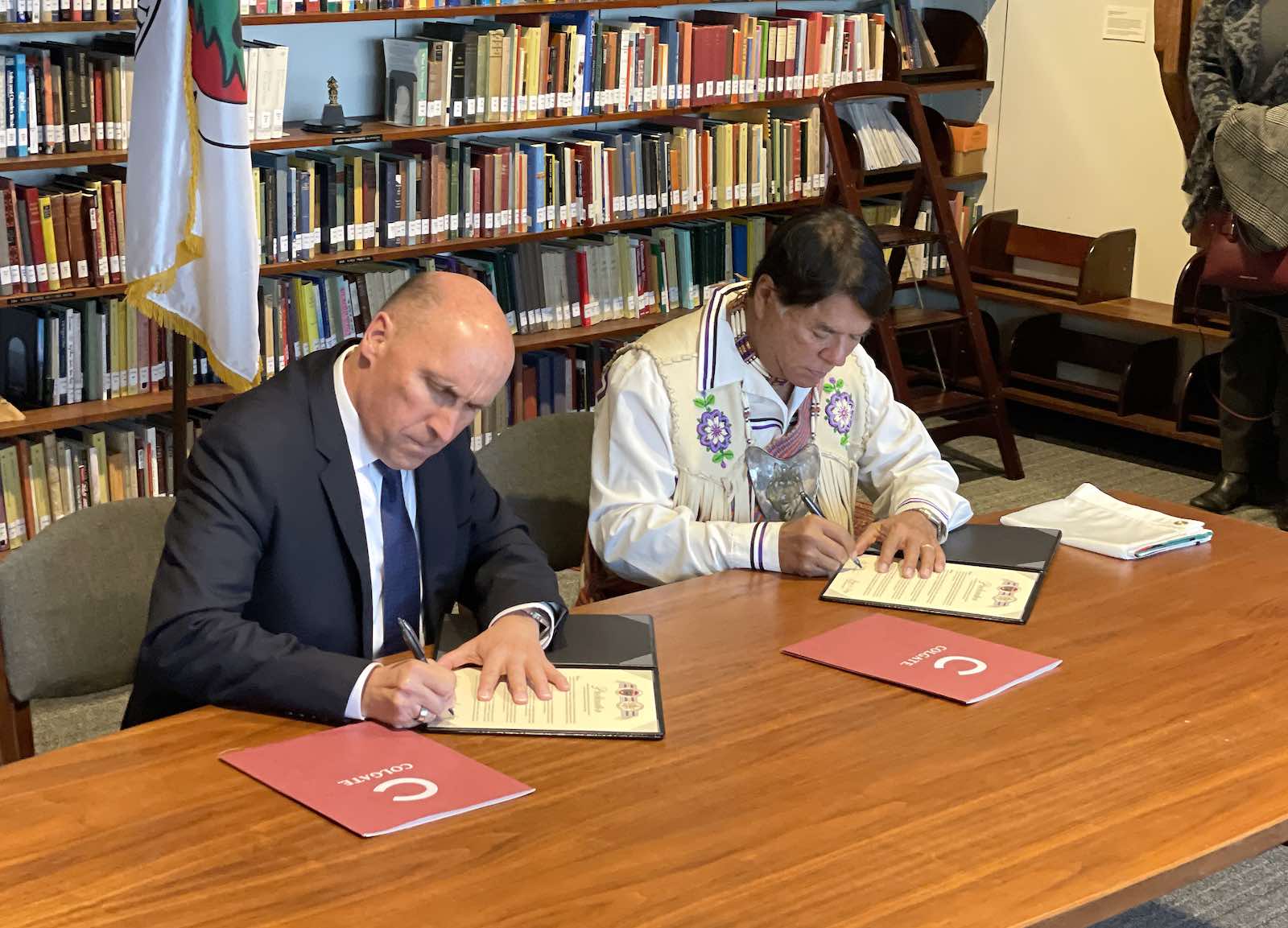 Wednesday’s repatriation was among the largest single transfers of cultural artifacts in New York State history and included a variety of objects that were interred with Oneida ancestors during burial.

The collection of transferred items includes:

“For decades, too many museums and other educational and cultural institutions have followed indefensible practices regarding the ancestral remains and cultural artifacts of Native Americans,” said Oneida Indian Nation Representative Halbritter. “These practices have been allowed to continue under the belief that preserving history is of the ultimate importance without questioning the means of doing so. They assume it is possible while divorcing the history from the people to whom it belongs, presuming to tell our stories with stolen artifacts and unfamiliar voices. Native people’s funerary and ceremonial objects should never be the property of museums in this way. Our dedication to continuing this conversation is one of the many values the Oneida Indian Nation shares with Colgate University. We are grateful for these efforts, but equally grateful for the university’s and museum’s understanding that they are what is required in a society that meaningfully recognizes the sovereignty and dignity of Native people. ”

“Many of the sacred belongings being repatriated today came into the university’s possession through a collection acquired in 1959 – one that should never have been acquired,” said President Casey. “For this, on behalf of this university, I humbly apologize. I hope that today’s repatriation brings Colgate closer to Members of the Oneida Indian Nation, both as neighbors and as partners, in continuing this important work to see that all of the Nation’s rightful belongings are properly and respectfully returned.”

The ceremony is the latest in a series of repatriations that began in 1995 with the transfer of remains of seven Oneida ancestors and eight associated funerary objects. The transfer of remains of two ancestors and two cultural artifacts followed in 2002 along with the return of a sacred mask in 2019. Most recently in 2020, a wide-ranging inventory of the museum’s collections resulted in the repatriation of remains from at least six additional Oneida ancestors.

Additional repatriations are expected in the future as Colgate University and the Oneida Indian Nation continue to partner on the identification of ancestral remains and sacred and ceremonial objects within the Longyear Museum of Anthropology’s collections.

About the Oneida Indian Nation

The Oneida Indian Nation is a federally recognized Indian nation in Central New York. A founding member of the Haudenosaunee Confederacy (also known as the Six Nations or Iroquois Confederacy), the Oneida Indian Nation sided with the Americans in the Revolutionary War and was thanked by Congress and President George Washington for its loyalty and assistance. Today, the Oneida Nation consists of about 1,000 enrolled Members, most of them living in Central New York. The Nation’s enterprises, which employ more than 4,500 people, include Turning Stone Resort Casino, YBR Casino & Sports Book, Point Place Casino, The Lake House at Sylvan Beach, The Cove at Sylvan Beach, Maple Leaf Markets, SāvOn Convenience stores, RV Park, and marinas. Proceeds from these enterprises are used to rebuild the Nation’s economic base and provide essential services, including housing, health care, and education incentives and programs, to its Members.

This day in history: November 14

This day in history: November 15
Scroll to top